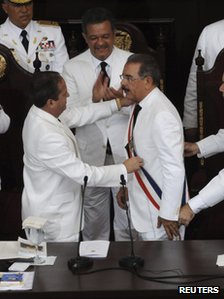 Danilo Medina has been sworn in as president of the Dominican Republic three months after winning the election in a close vote.

Addressing the Congress, the 60-year old economist vowed to fight corruption, create jobs and invest in education in the Caribbean nation.

“I’ll be good for the honest and the poor, but merciless with the dishonest and opportunistic,” he promised.

The previous President, Leonel Fernandez, was constitutionally barred from seeking a third term.

But Mr Mejia, who received 47% of votes cast, rejected the result.

In the days after the vote, Mr Mejia refused to concede and accused the governing party of buying votes and other irregularities.

Mr Mejia has now wished the new president success and asked for policies that will benefit all the people of the Dominican Republic.

The country, which shares the island of Hispaniola with Haiti, faces high unemployment and rising crime.

The Dominican Republic is one of the most popular tourist destinations in the Caribbean, and the economy has been growing steadily, at about 4.5% a year.

But more than 30% of its 10 million citizens still live below the poverty line, a problem Mr Medina promised to address.