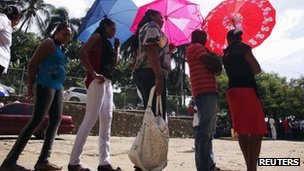 No major incidents and high turnout: election day in the capital, Santo Domingo

People in the Dominican Republic have been voting to chose a new president, in a tight race between two old political rivals.

No major incidents have been reported, despite passions running high over issues such as crime, unemployment and the rising cost of food and fuel.

Voting was delayed in some parts of the country due to heavy rain.

But the president of the Electoral Committee, Roberto Rosario, told journalists “the turnout has been high, with an active and peaceful participation from voters”.

Four other candidates are also running, but opinion polls say they have marginal support and no realistic chance of winning.

There are more than 300,000 people registered to vote who live abroad, most of them in the New York area. 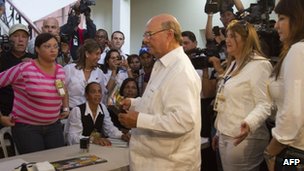 Opposition candidate Hipolito Mejia is trailing in the opinion polls

His Dominican Liberation Party (PLD) has appointed a 60-year-old economist, Danilo Medina, to run in the election.

Mr Medina’s opponent is also an old rival and an experienced politician, who defeated him in presidential elections in 2000.

He has vowed to fight corruption and create jobs.

But Mr Mejia’s opponents point out that when he finished his term in office in 2004, the country was facing probably the most serious financial crisis in its history.

The Dominican Republic is one of the most popular tourist destinations in the Caribbean, and the economy has been growing steadly, at about 4,5% a year.

But more than 30% of its 10 million citizens still live under the poverty line, a problem both Mr Medina and Mr Mejia have promised to address.