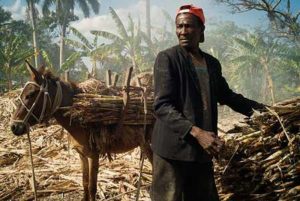 Written by Center for Economic and Policy Research
Last Thursday, in the Dominican Republic, every westbound bus traveling on the transportation artery Autopista Las Américas (The Americas highway) was stopped upon its arrival in the capital city of Santo Domingo between 7 a.m. to 10 a.m., according to Listín Diario. A joint operation between immigration officials, the National Police and the Dominican Army set up checkpoints, which led to the detainment of “dozens” of “illegal Haitians.”

The sugar-producing East, from which the buses came, is a hub for thousands of Haitian migrants working under brutal conditions cutting cane. As was reported by Dominican Today, “When inspectors entered the buses and asked the Haitians for their ID, if they were in order, they weren’t bothered, but dozens of them that didn’t [have appropriate documentation] were escorted onto buses to clearing centers.”

This description gives a good idea as to how Dominican authorities ascertain whether or not one is in the country illegally—by targeting those who appear to be Haitian. Summary detentions and mass deportations of Haitians amount to a longstanding and ubiquitous dynamic in Dominican law enforcement. The seemingly straightforward protocol of asking for proper identification quickly becomes an exercise in discrimination, as many Dominican nationals also have difficulty obtaining valid documentation. A 2006 survey by the Dominican government’s National Office of Statistics found that 22% of children born during the previous five years did not have birth certificates, “and thus,” Unicef noted, “legally, did not exist.” The crackdown against illegal immigration is closely linked to efforts to remove those of Haitian descent from the country.

The human rights community has strongly opposed mass repatriations to Haiti. Earlier this year, Amnesty International demanded that the D.R. “immediately halt the mass deportation of Haitian migrants.” Last month, the UN Office of the High Commissioner of Human Rights appealed to all governments to “refrain from conducting returns to Haiti” [PDF]. Given the “current situation prevailing in Haiti,” the High Commissioners also asked governments to “renew, on humanitarian grounds, residence permits and other mechanisms that have allowed Haitians to remain outside the country.” Similarly, the ACLU, along with more than 50 other groups, has called on the U.S. to stop deportations to Haiti.

In April, PBS’s Need to Know interviewed a Dominican human rights activist of Haitian descent, Sonia Pierre, who founded the organization MUDHA–El Movimiento de Mujeres Dominico-Haitianas. She refutes claims that deportations are focused solely on Haitians with no documentation who’ve only recently arrived:

They’re deporting people who’ve lived all their lives here and sending them back to Haiti. They were born here—children without their families, mothers with their newborns—sending them to a country they’ve never lived in…They don’t ask for a document. If they think you look like you could be Haitian, you’re getting on the bus. It’s that simple.

Her account is corroborated by Jesuit priest Regino Martínez, who ministers in the volatile border town of Dajabón and directs the NGO Solidaridad Fronteriza (Border Solidarity). As he explained to Inter Press Service in 2007:

“People are deported, mistreated and abused simply because they’re Haitian or especially dark-skinned…they round up and deport (Haitians) even when their papers are in order.” The main factor determining repatriation, he asserted, is “how dark their skin is,” as Haitians tend to be darker than Dominicans.

In principle, the Dominican constitution once provided for birthright citizenship, under which any child born on Dominican soil was entitled to all rights enjoyed in the Republic. Despite this, generations of Dominicans of Haitian descent had trouble accessing basic government services, including health care, higher education and basic documentation. On Jan. 26, 2010, even that principle was nullified. A new constitution was enacted which, according to the RFK Center for Justice & Human Rights, “redefine[d] Dominican citizenship and den[ied] children born on Dominican soil to immigrant parents ‘residing illegally’ in the country their legal claim to Dominican nationality.”

In an interview with IPS in 2008, Bridget Wooding, then an associate researcher on migration at the Latin American Faculty of Social Sciences, noted that “The fact that there is no pathway for Haitian immigrants and their descendants to regularise their immigration status is a serious obstacle for access to education and health services. Without documents, it is very difficult for Haitians to have their labour rights respected.”

A typical response among Dominican political leaders, like Senator Prim Pujals Nolasco, is that “We are a country of limited resources.” Former Director of Immigration Sigfrido Pared Perez echoes this argument when stating that “it’s economics. It’s a matter of survival. Many world powers would like the Dominican Republic to take on the Haitian issue, but it is not that easy. We can help with the Haitian issue, but not solve it.”

Neither addresses the issue of verified deportations of Dominican citizens. But Haitian laborers’ legal precariousness has been an enormous boon to those Dominicans best positioned to reap the additional profits that come from using a submissive and fearful labor force. The construction sector, for example, is marred by very hazardous conditions, and low pay (sometimes none at all). But the Dominican construction industry’s workforce, including that of the lucrative luxury sector, is estimated to be 85% Haitian.

Being of Haitian descent—more so than being a Haitian citizen—has been a primary concern in much of the Dominican government’s policy and enforcement throughout the turbulent history of the two countries, which together share the island of Hispaniola. Race relations and the two countries’ mutual antagonism were chronicled this spring in the hour-long PBS feature, Haiti & the Dominican Republic: An Island Divided. Writing in Boston Review, Dominican-American author Junot Díaz touches upon this history as well:

In the modern period, few Caribbean populations have been more hostile to Haitians. We are of course neighbors, but what neighbors! In 1937 the dictator Rafael Trujillo launched a genocidal campaign against Haitians and Haitian Dominicans. Tens of thousands were massacred; tens of thousands more were wounded and driven into Haiti, and in the aftermath of that genocide the relationship between the two countries has never thawed.

The Jan. 2010 earthquake, however, carved out an opportunity to revisit prior relations, and the D.R. did so, becoming one of the major protagonists in post-quake relief work. It was singled out by then-Prime Minister Jean-Max Bellerive, along with Cuba and Venezuela, for special distinction.

In a shocking reversal of decades of toxic enmity, it seemed as if the entire Dominican society mobilized for the relief effort. Dominican hospitals were emptied to receive the wounded, and all elective surgeries were canceled for months. (Imagine if the United States canceled all elective surgeries for a single month in order to help Haiti, what a different [sic] that would have made.) Schools across the political and economic spectrums organized relief drives, and individual citizens delivered caravans of essential materials and personnel in their own vehicles, even as international organizations were claiming that the roads to Port-au-Prince were impassable. The Dominican government transported generators and mobile kitchens and established a field hospital. The Dominican Red Cross was up and running long before anyone else. Dominican communities in New York City, Boston, Providence, and Miami sent supplies and money. This historic shift must have Trujillo rolling in his grave. Sonia Marmolejos, a humble Dominican woman, left her own infant babies at home in order to breastfeed more than twenty Haitian babies whose mothers had either been seriously injured or killed in the earthquake.

Today, community-based organizations work against what they perceive to be the restoration of the status quo ante, as deportations continue and the number of cholera-related deaths in the D.R. grow. Organizations like MUDHA and Solidaridad Fronteriza are attempting to build upon the Dominican public’s outpouring of sympathy one and a half years ago to push for legal and economic rights for Haitians and Dominicans of Haitian descent.

Solidaridad Fronteriza has gone from “town to town, interviewing workers to determine how long they’ve been in the Dominican Republic, where they work, how many children they have, their identification number in Haiti, and any other bits of information they could put on legitimate-looking badges.” The aim is to create “a way for the undocumented to document themselves.” Father Martinez describes such self-identification as having “no legal authority, but a moral one.”