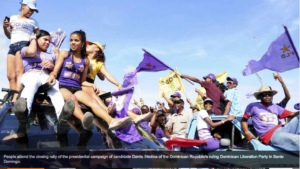 SANTO DOMINGO, Dominican Republic (AP) — A governing party official appeared to have scored a first-round win in the Dominican Republic’s presidential election but supporters of his main opponent complained of vote-buying and other forms of fraud and said they would challenge the results.

Danilo Medina of the current president’s Dominican Liberation Party received just over 51 percent of Sunday’s vote with 83 percent of the ballots counted, according to the Caribbean country’s Electoral Commission. His main rival, former President Hipolito Mejia of the Dominican Revolutionary Party, had nearly 47 percent. The winner needed more than 50 percent to avoid a runoff.

Medina said he was confident he would win, but that the Electoral Commission would keep scrutinizing ballots through the night. He thanked a crowd of supporters and sent them home.

“We will celebrate in a big way tomorrow,” he said.

Mejia did not concede and questioned the results as did others in his party. Luis Abinader, his vice presidential candidate, said the Dominican Revolutionary Party would present a report detailing irregularities on Monday.

The balloting appeared orderly in general but there were widespread reports that backers of both parties were offering people payments of about $15 to vote for their candidate or to turn over their voting cards and withhold their vote. Campaign officials denied the allegations.

Observers from the Organization of American States confirmed incidents of vote-buying but not enough to taint the overall results of what was otherwise a “successful,” election, said the head of the mission, Tabare Vazquez, a former president of Uruguay.

The candidates were vying to succeed President Leonel Fernandez, who spent $2.6 billion on such major infrastructure projects as a subway system, hospitals and roads to modernize a country that is the top tourist destination in the Caribbean but remains largely poor. Fernandez was barred by the Constitution from running for a third consecutive term.

Many voters conceded that Medina, a 60-year-old economist and stalwart of the Dominican Liberation Party, wasn’t a particularly exciting candidate, but said they were eager for stability in a country with a history of economic and political turmoil.

“I don’t want major change,” said Amauris Chang, a 59-year-old shop owner. “I want the country to grow and I want it to be peaceful, and I think that’s a common idea among people who are civilized.”

Six candidates were running for president, but Medina’s only real opponent was Mejia, who lost his bid for a second presidential term in 2004 because of a deep economic crisis sparked by the collapse of three banks.

Mejia and his Dominican Revolutionary Party have a devoted following. Supporters of the 71-year-old garrulous populist sought to portray some of the public works spending as wasteful and benefiting backers of the president, and insisted he wasn’t to blame for the 2004 economic crisis.

“The crisis could have happened to any government. It had nothing to do with Hipolito Mejia,” said 62-year-old maintenance man Alonso Calcano.

Demetrio Espinosa, a 60-year-old jobless resident of the capital’s Colonial district, said Mejia understands the needs of poor people like him. He said most people can’t afford to be treated in the new hospitals nor do they need a subway if they don’t have a job.

“They made a lot of their friends into millionaires and spent the public’s money,” Espinosa said of the ruling party.

Besides president, Dominicans were electing a vice president from a field that included the heavily favored first lady, Margarita Cedeno de Fernandez, and seven members of the Chamber of Deputies who will represent people who have settled overseas. Tens of thousands were expected to cast ballots in places with large numbers of Dominicans, including New York, New Jersey, Florida and Puerto Rico.

Both presidential candidates proposed to increase spending on education and to do what they can to create jobs in a country of 10 million people that is largely dependent on tourism and where unemployment is officially about 14 percent, though the vast majority of workers are in the poorly paid informal sector. The typical salary for those who do have regular jobs is around $260 a month.

The Dominican Republic has also become an important route for drug smugglers seeking to reach the U.S. through nearby Puerto Rico and there are widespread concerns about the influence of drug trafficking. The candidates also traded accusations of incompetence and corruption.