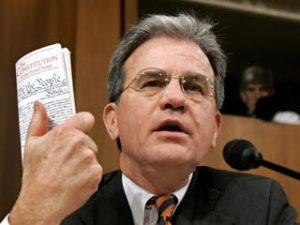 S. 3317, the Haiti Empowerment, Assistance, and Rebuilding Act sponsored by Senator John Kerry (D-MA) was introduced on May 5, 2010. This bill authorizes $500 million in new spending for Fiscal Year 2011 and does not affect the appropriated humanitarian funds provided to Haiti for FY 2010.

The total amount of USAID, State, and DoD humanitarian assistance to Haiti already provided is $1,139,632,618. FY 2010 funds have been previously appropriated for Haiti relief, making it impossible for this money to be held. Therefore, claims that this money is being blocked by a lone Senator, are false. Click herefor USAID’s Haiti Earthquake Fact Sheet, detailing FY 2010 Funding Provided to Haiti to Date. The State Department is expediting the aid to Haiti but that the lack of this authorization bill is not holding up their delivery of relief funding to Haiti. To say that S.3317 is holding up aid to Haiti is a mischaracterization of the situation.

As written, S.3317 does not reduce spending by other government programs to pay for this new spending but instead adds to our national debt. Dr. Coburn wants to approve additional funds without increasing the deficit and without creating duplicative roles. Millions in wasteful, unnecessary, and duplicative spending programs have been identified at the State Department, in areas that much lower in priority than aid to Haiti. Click here for an outline of existing federal duplication.

I request that I be consulted before the Senate enters into any unanimous consent agreements regarding S. 3317, the Haiti Empowerment, Assistance, and Rebuilding Act of 2010.

There is no question we should do everything we can to assist our neighbors in Haiti seeking to recover from the devastating earthquake that killed and injured hundreds of thousands and left a million people homeless. I do not object to fulfilling our pledge to assist Haiti recover. However, I believe our charity today should not come at the expense of the next generation. Therefore, any additional aid we provide must be paid for with cuts to lower priority programs elsewhere within the federal government’s bloated $3.7 trillion annual budget.

The Haiti Empowerment, Assistance, and Rebuilding Act authorizes $500 million in aid to Haiti for Fiscal Year 2011. The legislation as written does not reduce spending elsewhere in the government to pay for this aid. I feel that any future levels of aid to continue the reconstruction and rebuilding after the earthquake that hit earlier this year must come from eliminating or reducing lower priority programs at the State Department and the United States Agency for International Development (USAID). At this time, when our nation is projected to add more than a trillion dollars a year to our already unsustainable $13.4 trillion national debt, it is irresponsible to authorize any new spending that is not paid for because the end result will be a lower standard of living for the United States and an inability for our nation to assist others when disasters and other crises occur in the future.

Unfortunately, some misinformed members of the media have stated that my objection to this bill is preventing aid from getting to Haiti and that Haiti has not received aid from the United States. This is clearly not the case. As you know, Congress has already appropriated over $1.1 billion in emergency aid for Haiti in the Fiscal Year 2010 Supplemental Bill (Public Law 111-212). According to the United States Agency for International Development’s website, as of September 24, 2010 the United States government had provided $1.1 billion in humanitarian assistance to Haiti for the earthquake.1

In addition to these amounts, Congress has provided $770 million in the Fiscal Year 2010 Supplemental bill to Haiti through the Economic Support Fund and another $147.6 million under the International Narcotics Control and Law Enforcement for further emergency relief, rehabilitation, and reconstruction aid to Haiti. Section 1007 of the law stipulates however, that this money cannot be obligated until the Secretary of State reports to the House and Senate Appropriations Committees on two matters: the United States will consult the Haitian government and local organizations on how the money will be spent and that clear and achievable goals and oversight controls have been established in writing to govern the spending of the money. Despite the fact that more than 10 weeks have passed since this bill was passed into law the Secretary of State appears to have fulfilled that condition only this week. While I am disappointed that executive branch bureaucracy seems to have delayed the ability of Haitians to begin long-term reconstruction, I am pleased that the aid that Congress appropriated months ago can finally move forward.

I will continue to work with the sponsors of S. 3317 to eliminate lower priority programs at the State Department that can and should be ended in order to pay for long-term reconstruction aid to Haiti. Thank you for protecting my rights regarding S. 3317, the Haiti Empowerment, Assistance, and Rebuilding Act of 2010.