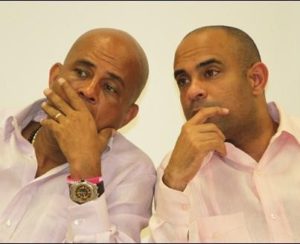 Haiti was blessed with an unusual combination.

Michel Martelly, a truly charismatic president – for the moment still loved by Haiti’s young people – 54% of the voting population – and backed by his close friend, Laurent Lamothe, a skilled businessman.  Both claimed to wish for a change in Haiti’s reputation for corruption but – unfortunately – only one member of the team seems to be pursuing this goal and this pursuit could lead to his removal from office as Haiti’s Prime Minister.

Lamothe’s effort to bring some sort of cohesion to government and reduce corruption has generated many enemies which includes most of Haiti’s Parliament that depends upon huge bags of money in order to do their work.

Some are pressing for a return to Max Bellerive, Martelly’s cousin, who has already raped and pillaged our treasury to the limits of credibility. There is an old Creole saying that “Only a dog returns to its vomit…”

Unfortunately, Michel Martelly is surrounded by a bunch of criminals who are more interested in their own prestige, and bank accounts, than the progress and well-being of their fellow Haitians. Martelly’s inner circle has been the source of bad advice since day one.

A clean transition from the corrupt Preval period was blurred as Martelly kept Preval’s Central Bank Governor in place, effectively blocking the Martelly promise to pursue Preval for some $198,000,000 in Petro Caribe funds.  He then became involved with his criminal cousin, Max Bellerive, Preval’s Prime Minister, as he signed some $350,000,000 in illegal contracts.

Martelly was embarrassed with revelations, to the effect, that he got some $2.3 million from the deal.

It has been downhill from there as Sophia’s  greed and ego overcame common sense. And this stupidity indirectly, directly led to the present situation in which the judge, assigned to investigate her handling of State funds, managed to die of a stroke, now interpreted – by our out of control media – as murder!

What should have been the best presidency since the departure of Duvalier – as Martelly did the charismatic leader bit, while Lamothe worked away to accomplish things…..is on the verge of melt-down as a multitude of players work for their own account.

At least one insider – Thierry Mayard-Paul – has approached the opposition, hoping for a slot in a new government, should Martelly collapse.

Time for Michel Martelly to set the clock back to Zero and take stock of the situation. So long as he is partnered with Laurent Lamothe, his presidency will run its course.

However, should he change horses, at this point, and select a new Prime Minister, plus a cabinet chosen by Preval, he will stagger along for a short time, and then fail.

Preval has already discussed how he plans to take control. He has members from one of Haiti’s major families planted in each opposition team. 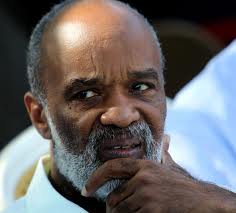 They have a plan to control the cabinet, control the government, and remove Martelly from the game.

How Martelly could have been talked into flying via helicopter, to Marmelade, to beg for Rene Preval’s help is beyond belief!! Preval insiders were disgusted, believing they need no involvement with Martelly. He is a loser!!

How Martelly could consider Preval as any sort of expert in the selection of a balanced cabinet of the sort needed to save Haiti!

We are witnessing a situation in which Martelly is allowing his team a clear opportunity to blame everything on Lamothe, perhaps in the hope that a Preval/Martelly partnership will save Sophia and his son from prosecution for obvious crimes.

For detached watchers, it has become obvious that Martelly is willing to throw his once close friend under the bus in an effort to save Sophia’s gigantic ass.

Martelly should remember that the bus he plans to throw Lamothe under is one a regular route and will be followed by another bus a few moments later.

Preval, and other opposition elements, plan to throw Martelly under that bus.

It would be interesting to watch Martelly, and his criminal associates’  faces when the reality finally hits them – Lamothe was their key to success and survival – as the bus crushes their government and replaces it with a revisit to Preval, Bellerive and the rest of that already failed team.

The Nation cannot afford this already failed experiment to be revisited.

Michel Martelly must work to heal the potential fracture of his friendship with Laurent Lamothe. The Nation can survive with the Martelly/Lamothe team.

It is dead with the threatened alternative.

With the final failure of Martelly   there will be a violent and destructive reaction from Martelly’s young supporters who have already abandoned the American forced concept of Democracy. They have given up on voting, the CEP, and all of the other garbage as they have witnessed the zero value of such a philosophy – so far as their own situation is concerned.

At the moment, they have a faith in Martelly and they belief that Martelly is trying to do something for them. And they believe Laurent Lamothe is working for their best interests. This mass of young Haitians is willing to tolerate many mistakes, in order to give Martelly  and Lamothea chance to succeed.

They like Laurent Lamothe and what he is doing to improve the Nation.

If and when they see Martelly abandon their future for a partnership with the criminal Preval cabal  – and then fail – they will form a wave like Haiti has not see since the 1800s when the Mob swept in from the countryside to destroy downtown Portau-Prince.  Semaine Sanglant I believe it was called.

Let us get back to what the young voters want.

The  Martelly/Lamothe team that they believe works for their future, and those of their children.

They don’t expect much and should not be disappointed.

The Nation cannot afford this.