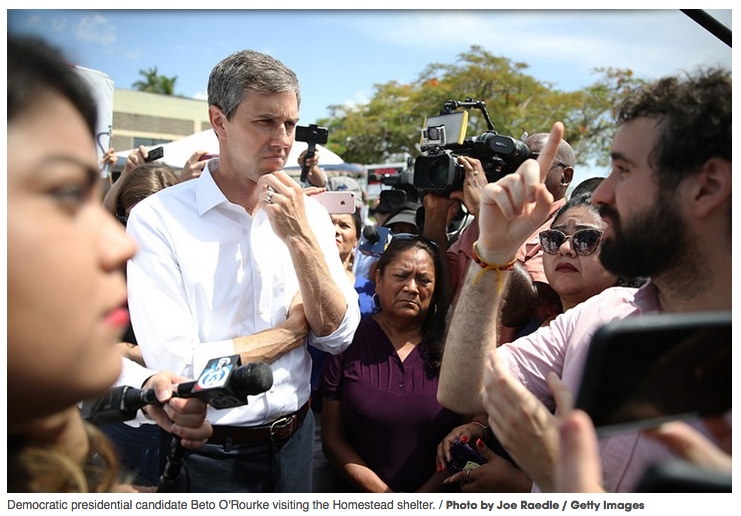 When it comes to immigration, Democrats are the biggest hypocrites. From House Speaker Nancy Pelosi to the Democratic presidential candidates, everyone in the so-called progressive party complains about the Trump administration’s treatment of people caught crossing the border.

This past week, 11 of the 20 candidates who were in town for the first two Democratic debates visited the controversial Homestead shelter for migrant children. They did photo ops and railed against the commander in chief. During her stopover Wednesday, Massachusetts Sen. Elizabeth Warren called the separation of migrant families at the border “a moral stain on the U.S. inflicted by Donald Trump.” When Beto O’Rourke visited the next day and peered over a fence to get a glimpse of the kids at the shelter, he said: “We see them. We hear them. We support them. We love them. We will not give up till they are free.”

During the Wednesday night debate, New Jersey Sen. Cory Booker promised to end immigration, customs, and border policies that violate human rights. “When people come to this country, they do not leave their human rights at the border,” he said. New York Mayor Bill de Blasio — who obviously doesn’t understand anything about Miami Cubans — tugged at people’s emotions by bringing up the viral photo of the father and baby daughter who drowned trying to swim across the river. “Those are not our values,” he said. “We have to get under the skin of why we have this crisis.”

It’s a dog and pony show to win over Latino voters. Democrats have never been serious about making immigration fair for everyone seeking asylum in the United States. In December 1991, Democrats controlled the House and Senate when I joined Jesse Jackson and then-congressman Charles Rangel on a humanitarian mission to take food and clothes to nearly 7,000 Haitians being held at Guantanamo Bay. Those people had fled their homes following the coup against Jean-Bertrand Aristide, at the time their country’s first democratically elected president in more than 30 years. Yet, the Democrat-controlled Congress did nothing to grant them protective status when then-President George H.W. Bush refused to revise U.S. policy for refugees.

Two years later, Democrats were still in control when Bill Clinton continued Bush’s policy of not allowing Haitians into the country. Clinton reneged on a campaign promise to stop repatriating Haitians. By 1994, 21,000 Haitians, along with more than 30,000 Cubans who were intercepted at sea, were housed in tents in the scorching heat with no air conditioning and barely enough food and water to take care of all the refugees.

Democrats had another chance to fix immigration during the first two years of Barack Obama’s first term when they controlled Congress before the 2010 midterm election. They should have passed laws that would prevent the horrible, inhumane treatment of immigrants by the Trump administration.

Warren and New York Sen. Kirsten Gillibrand skipped out on a crucial vote Wednesday to address the border crisis so they could tour the Homestead shelter and ham it up for reporters. The bipartisan package, which was approved by an overwhelming majority of the Senate, provides $4.59 billion in emergency funds that includes $2.88 billion for safe shelter and care for the children in custody and $1.1 billion for new migrant care and processing facilities. Meanwhile, Pelosi — the most prominent Democrat on Capitol Hill — said she was giving in and would reluctantly pass the Senate bill. “The children come first,” she said.

Considering how long Pelosi has been in Congress, she took her sweet time to recognize the plight of immigrant children. I am no Trump supporter and would never vote for him, but the Democrats are only ranting about the mistreatment of immigrants because it’s election season. Under Democratic presidents, they didn’t do anything to change immigration laws.

The hard truth is that the only clear path for immigrants to enter and remain in the United States is to be rich or a trophy wife like Melania Trump. Democrats deserve as much blame as Republicans.