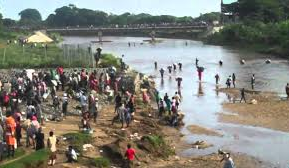 This demographic is unique in that most are family units with a biological minor child who is a national of a third country, usually in South America. About 800 of the 1,000 apprehensions are members of a family unit, and include over 230 minor children who are nationals of a third country such as Brazil and Chile. Many of these family units have resided in Chile and other South American countries for several years prior to departing for the United States.

Del Rio Sector’s total apprehensions to date this year are in excess of 40,000, already more than double the total number of arrests made during the previous fiscal year. More than 34,000 of the individuals arrested this year, over 80 percent, are from approximately 49 countries other than Mexico.

All immigrants arrested are medically evaluated and are referred to medical professionals for more advanced care if needed.

“Our agents are seeing a rise in Haitian nationals entering the country illegally which presents challenges that we are meeting head on,” said Del Rio Sector Chief Patrol Agent Raul L. Ortiz. “We will continue to do everything we can to care for these family units with small children.”