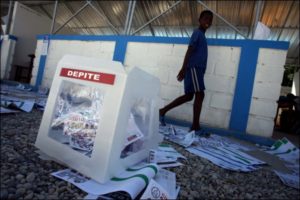 Reports of widespread corruption and voter intimidation during Haitian elections on November 28 prompted a majority of presidential candidates to lead a march through the capital of Port-au-Prince calling for the vote to be annulled. But an even bigger outrage occurred earlier, with the banning of Lavalas Family, Haiti’s largest and most popular party, from participating at all.

Kim Ives, a journalist and editor with Haiti Liberté [1], a weekly newspaper published in Port-au-Prince and New York City, explains why the election winners weren’t elected but “selected.”

The Center for Economic and Policy Research did a good job of summing up many of the irregularities widely reported by both Haitian and international media and observer teams:

[I]nability of many voters to find the correct voting center and/or polling station; inability of voters to find their names on the electoral registers posted up outside the polling stations; saturation of the call centers overwhelmed by callers seeking where to vote; instances of incorrect application of voting procedures (the signing of the ballots by BV [voting bureau] presidents before the arrival of the voter); instances of voter manipulation–repeat voting of some voters facilitated by complicit poll workers and unidentified party agents; the lack of control of already limited voting space by the poll workers, as well as the indiscipline of many mandataires [candidates’ observers], led to clogged polling stations where control of the process became tenuous and facilitated misconduct.

Furthermore, several candidates claimed that mandataires from President René Préval’s party, Unity, took over voting bureaus around the country the night before the election, not allowing mandataires from other parties to enter or observe.

All of this comes on top of the Provisional Electoral Council’s (known by the initials CEP) original and most important sin: The arbitrary and unjustifiable disqualification of exiled former President Jean-Bertrand Aristide’s Lavalas Family, Haiti’s largest and most popular party.

The debacle moved 12 of Haiti’s 18 presidential candidates to issue a declaration in an unprecedented joint press conference at Pétionville’s Caribe Hotel on the day of the vote, calling to annul the elections because “the government of René Préval, in agreement with the CEP, is putting into execution the plan hatched to tamper with the elections…with the help of the official political party and its candidate, Jude Celestin.” (Faux-Lavalas candidates Yvon Neptune and Yves Cristallin attended the candidates’ pre-press conference conclave, but did not sign the statement.)

Despite everything, the CEP proclaimed the election satisfactory. “We cannot say it was a 100 percent success, but the day was successful,” declared the CEP’s general director Pierre Louis Opont. Only 56 of the 1500 voting stations nationwide, or 3.56 percent, had irregularities, the CEP claimed.

As usual, Washington let its vassals in the Organization of American States/CARICOM Joint Mission be the first to rubberstamp the CEP’s charade. After noting many irregularities including “deliberate acts of violence and intimidation to derail the electoral process both in Port-au-Prince and the provinces,” CARICOM’s Assistant Secretary General Colin Granderson said, “The Joint Mission does not believe that these irregularities, serious as they were, necessarily invalidated the process.”

WITH THE U.S. paying for about half of the $30 million election, events unfolded pretty much as one would expect: a massacre of democracy that is then justified by its sponsors.

But this is where things get more complicated, and events might take some unexpected twists. So here is a five-point guide of things to watch for in the coming days as the magouy, or monkey business, multiplies.

The way much of the media has framed the election, the people will be victorious if any presidential candidate wins other than Jude Célestin, the candidate of Préval’s Unity party. In reality, the U.S., and even Préval, appear to have been preparing for another candidate’s victory for some time.

Although a Célestin “selection” cannot be completely dismissed, there have been grave doubts among Unity’s leadership about Célestin’s viability due to his numerous legal and financial problems, his apparently phony engineering degrees and his uninspiring oratory. Already Sen. Joseph Lambert, Unity’s campaign chief, has said the party “is ready to accept democratic change,” and “if we’ve lost the elections at the presidential level, we’ll go into opposition.”

A more likely “selection” appears to be that of Mirlande Manigat, the wife of former military-junta-puppet-president Leslie Manigat. She boasts broad support not just from Haiti’s bourgeoisie, but also from political thugs like Sen. Youri Latortue (recently accused of being a former death-squad leader) and Guy Philippe, the perpetually elusive leader of the death-squad/soldier “rebels” that helped overthrow Aristide in 2004.

Most importantly, Manigat is viewed favorably by the U.S., French and Canadian embassies, Haiti’s ultimate king- and queen-makers.

Compas musician Michel Martelly and notary Jean-Henri Céant are also possible “selections.” Martelly was a prominent supporter of both coups (1991-94 and 2004-06) against Aristide. Céant has postured as the antidote to Lavalas’ electoral exclusion, who will bring Aristide back from exile.

But both Aristide and Lavalas Family spokesperson Maryse Narcisse have made clear that the party has no truck with the “selections” and no “stealth” candidate. Céant admitted he even traveled to France to meet with and woo back former dictator Jean-Claude Duvalier in an effort to show how “broad” and “all-inclusive” his government would be.

Already, opportunism has rent the historic show of unity made by the 12 “opposition” candidates on November 28. The following day, when the CEP (perhaps slyly) suggested that Martelly and Manigat were leading in preliminary vote tabulations, both candidates unceremoniously dropped their calls to annul the election.

Neither showed up at the meeting that the 12 candidates had planned for the next day, which Céant condemned on Radio Signal FM as “very grave.”

Martelly even denied that he had signed the joint declaration, saying it was not an ultimatum, but just a “request,” which the CEP “chose not to agree to” and “it has the final word.” Thus, he is now ready to “respect the popular verdict,” he said, secure in the belief that he will be the winner.

Manigat, after saying the elections were “organized robbery” on Sunday, backtracked on Monday, telling the Haitian Press Agency that she had received “guarantees from the CEP and the government” and was “still in the race and had a good chance of winning.”

“I am coherent and I keep my word,” Céant responded to the betrayals. “We have to completely break with these old tricks. If we use them, we become no different than those we are fighting.”

In short, despite nationwide protests, there is no indisputable leader of either the disgruntled candidates calling for a rematch or popular organizations calling for the CEP’s overhaul, facilitating the electoral forced march of Préval and his international sponsors.

3. Control of the parliament is key to control of Haiti.

While the media’s focus has been primarily on the presidential race, equally important are the contests for one-third of the senate (11 seats) and all 99 deputies. The president must choose a prime minister, who actually wields executive power, from the parliament’s majority party.

With more candidates, money and organization, the ruling party, which by default swept last year’s massively boycotted partial senate elections, is likely to again control parliament. This will completely hamstring any non-Unity president, who will already be weak and assailed coming from this clearly compromised polling.

In the face of protests, the CEP has already reassured voters and candidates that voting will be re-held wherever there were major problems. However, popular organizations grouped around the Heads Together of Popular Organizations (Tet Kole) and others have been saying in press conferences and demonstrations for months that the CEP, hand-picked by Préval, is too corrupt and has to be overhauled and selected by popular and representative civil society groups or a provisional government (which is essentially how the 1990 CEP was formed). Gaillot Dorsinvil, the CEP’s secretary general, is viewed as particularly slavish to Préval.

5. Haiti is still militarily occupied and effectively administered by foreigners and their minions.

The real power in Haiti lies militarily with the 13,000 soldiers of the UN Stabilization Mission in Haiti (MINUSTAH), and economically with the Interim Commission to Reconstruct Haiti (CIRH) headed by former U.S. President Bill Clinton. This control effectively neuters any sovereignty that these elections might aspire to.

One of the final acts of Haiti’s last parliament in April was to pass a law empowering the completely unelected 26-member CIRH (composed half of foreign bank and government representatives, half of Haitians from or beholden to Haiti’s ruling elite) to decide and direct how to spend the $10 billion in international assistance raised to rebuild Haiti after the January 12, 2010, earthquake. That mandate will continue at least until the end of 2011.

Meanwhile, MINUSTAH’s mandate continues until October 14, 2011, and the UN Security Council has given no signs of wanting to pack up the operation anytime soon. Several UN officials have spoken of decades of “commitment.” However, the Haitian people’s resentment has turned to rage after learning that MINUSTAH troops likely introduced deadly cholera into Haiti, and there is a rapidly growing anti-occupation movement.

In short, the election, which will likely go to a January 16 runoff after final tallies are announced December 20, may well result in a president other than Célestin, but this makes it no less a “selection.”

Préval’s main concern is retiring to his hometown of Marmelade without threat of prosecution or exile, a matter he has reportedly broached with several candidates. Washington, with its partners in Paris and Ottawa, is primarily interested in installing a government which will follow orders and not exhibit any “nationalist” tendencies, as one U.S. Embassy cable (released this week in the giant WikiLeaks document dump) complained about Préval.

In the final analysis, whoever is elected president in these “occupation elections” will be little more than a “portrait,” as Haitians say.