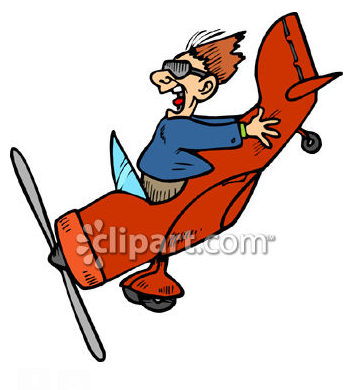 The Covid-19 crisis in America is so dire now, international aid workers have arrived to help.

“This is a humanitarian disaster — probably one of the worst stories I’ve covered in my career here at CNN,” the network’s Chief Medical Correspondent Dr. Sanjay Gupta said Thursday.
Workers from Doctors Without Borders are trying to help the US get a grip on the pandemic, he said. More than 241,000 people have died from coronavirus nationwide — a number that is rapidly growing every day.
“I mean, this is an organization that typically covers true disasters and medical crises all over the world,” Gupta said.
“And when they sort of look at a map right now and say, ‘Where do we need to be?’ they pointed to the United States. They were in nursing homes in Detroit. They went to Missouri. They’re in these different places trying to offer their services. And still, the numbers are what they are.” 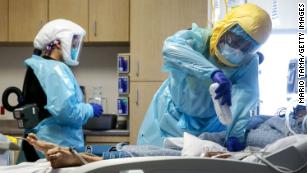 Some hospitals are running out of health care workers. Here’s what could happen next
The numbers are simply staggering. On Wednesday, the US recorded 1,893 deaths, according to Johns Hopkins University. The tally would reflect a new high since May, though it may be skewed by an outsized number from Georgia that could include backlogged deaths.
More than 110,000 additional people in the US are projected to die from Covid-19 in just the next two months, according to the University of Washington’s Institute for Health Metrics and Evaluation.
The US has also topped 100,000 daily infections at least nine days in a row. Wednesday was the second consecutive day of record numbers of Covid-19 hospitalizations.
And new reports show the pandemic is only ramping up as the country approaches a critical holiday season.

The White House coronavirus task force warned of “accelerating community spread across the top half of the country” in reports distributed to states this week.
The panel, which last week warned of “significant deterioration in the Sunbelt,” said that has led to the “most diffuse spread experienced to date.” 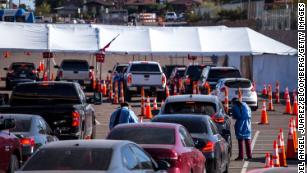 Texas becomes the first US state with more than 1 million Covid-19 infections
A separate forecast from the Children’s Hospital of Philadelphia Policy Lab projects conditions will worsen in the West Coast, the Northeast and the mid-Atlantic states over the next several weeks.
Hospitalizations, ICU admissions and ventilator use are rising in every single state, the lab said.
“In every Midwestern state, COVID-19 patients are occupying more than 25% of ICU beds,” it reported.
That’s as the US reported the highest number of hospitalizations ever on Wednesday — with more than 65,000 Covid-19 patients nationwide, according to the COVID Tracking Project.
“The nearly universal rise in statewide hospitalization rates, particularly in our colder regions, is a pattern that will grow as we move into the holiday season,” the policy lab said.
Some hospitals have reached full capacity and are sending patients away. And doctors are pleading for the public to get more serious about wearing masks, washing hands and physical distancing.

A critical holiday ahead

But experts worry their warnings will fall on deaf ears as some Americans prepare for Thanksgiving — when gatherings could easily spark new outbreaks. 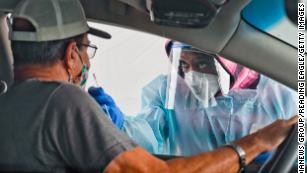 A negative test results doesn’t mean you’re safe for Thanksgiving
“On a personal level, the most prudent thing that families can do this holiday season is choose not to gather in person with their older higher-risk relatives. However, this pandemic has taken such an emotional toll, on children and seniors alike, that we suspect many families will likely take the risk of gathering,” the policy lab said.
“For those that do, outdoor events are safer than indoors, and conscientious spacing of older vulnerable individuals from the rest of the family will be important,” it said. “But even more important is a commitment to quarantine before visiting family.”
The holidays also mean many college students will likely return home to spend Thanksgiving with family and could unknowingly bring the virus back with them. 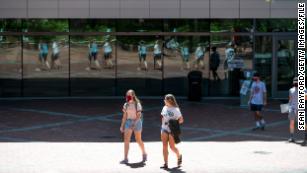 Will college students bring Covid-19 home for Thanksgiving?
College campuses in all 50 states have reported Covid-19 cases since the pandemic began.
Syracuse University said it’s moving to completely online learning after an “an increase in COVID-19 cases among our student population.”
And the University of Maryland’s football program said it’s pausing all team-related activities after “an elevated number of COVID-19 cases within the Terrapin’s program.”

Poll says most Americans wouldn’t comply with another shutdown

Fewer than half of Americans say are very likely to comply with another lockdown, according to a new Gallup poll.
About 49% of Americans surveyed between October 19 and November 1 said they would be very likely to stay home for a month if health officials recommend it following a coronavirus outbreak in their community. That’s down from 67% in the spring. 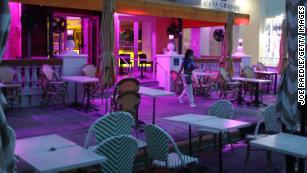 No one wants more shutdowns, so officials have enacted different kinds of new rules
While 18% said they were somewhat likely to comply, a third of people said they would be unlikely to comply with lockdown orders, the results showed.
While Americans are less willing to stay at home, the results show they’re actually more worried about the pandemic — with 61% saying they believe the situation is getting worse, compared to 40% in April.
The results show a political divide in those willing to stay home. About 40% of Republicans polled said they were willing to comply with a stay-at-home order, down from 74% in the spring.
By contrast, 87% of Democrats said they would likely comply, a slight drop from 91% in March and April.
Health experts have said mask use could significantly reduce the need for more shutdowns.

Even with good news about Covid-19 vaccines, a top global health official said it’s important to manage expectations.
For example, preventive measures — like wearing masks and social distancing — need to be kept up.
“While we hope we’ll get more good news about vaccines, it’s going to take time to scale up production to get them out to all the countries and then get enough people vaccinated so life goes back to pre-Covid days,” World Health Organization Chief Scientist Dr. Soumya Swaminathan said Wednesday. 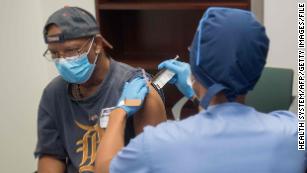 Moderna expects to know by the end of the month whether its Covid-19 vaccine works
And even when a vaccine arrives, people may need booster shots in the future, said Dr. Anthony Fauci, director of the National Institute of Allergy and Infectious Diseases.
“I don’t think it’s going to be one and done, as they say,” Fauci told the Financial Times on Wednesday.
But a vaccine will likely suppress the spread of the virus below pandemic and epidemic levels. But “as people who were immune lose their immunity, they may become re- susceptible,” Fauci said.
“Traditionally, if you look back at common cold coronaviruses and the experience we have, it is not the kind of virus that usually gives lifelong immunity.”