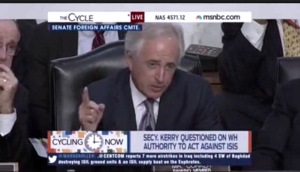 Kerry got into a heated exchange with Corker who said, “I want to say as I said personally, we have three senators, president, vice president, secretary of state, that are exercising terrible judgment right now. And to say that you’re going to do this regardless of what we say, you’re not going to ask for buy-in by the United States Senate or House of Representatives on behalf of the American people in a conflict that’s going to be multiyear. Some people say a decade. Taking us into another country with a different enemy, is exercising the worst judgment possible.”

“I’ve said this to you as strongly as I can personally, that in essence what you’re saying to the chairman right now, saying if Congress wants to play a constructive role, we would welcome that, to me, this is a political game and I’m disappointed that you as secretary of state, being chairman of this committee, espousing the views you have espoused,” he added.