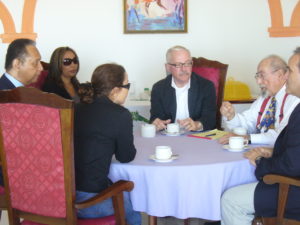 Ex-Congressman Bob Barr,  with his associates Ed Marger and Mike Puglise met with President Jean Claude Duvalier to set out a plan that will allow Duvalier’s smooth return to a life in Haiti.

Jean Claude Duvalier has returned to be with his people and help facilitate the flow of promised support.  He has proposed the creation of an entity through which restoration funds would pass, overseen by an internationally accepted group – such as DELOIT – that would supervise pending of the funds and provide a transparent and accurate accounting for everything involved.

Seed funds for this concept would be the $6,100,000 presently trapped in a Swiss court battle as Preval tries to gain control of these dollars. Three days after the January 12, 2010 quake, Duvalier asked that this money be given to some transparent organization, such as The Red Cross…but not the Preval government.

The funds were from Duvalier’s mother’s charity. He says she would have wanted this  money to be released to help her people. Simone Duvalier  was noted for her social work among the Haitian poor.