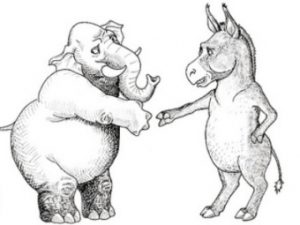 It was January 2010, and Haiti was still reeling from a severe earthquake days earlier. Gibson, an active-duty Army colonel, was commanding paratroopers using the Petion Ville Golf Club in suburban Port-au-Prince as their headquarters for humanitarian work.

Ruiz, an emergency room physician with a specialty in humanitarian work, was part of a group of 10 physicians and 10 other volunteers dispatched to the area by the Jenkins/Penn Haitian Relief Organization with the support of actor Sean Penn.

Each evening, Ruiz’s humanitarian group and Gibson’s Army forces conferred on the grounds of the country club to coordinate work for the following day.

On Tuesday night, they’ll coordinate again, this time to show bipartisanship by sitting together to watch President Obama deliver his State of the Union address.

“We are only as good as we are when we work as a team,” Ruiz said in a joint interview with Gibson.

The lawmakers said they want to build on their shared experience responding to the earthquake in Haiti.

“I had about 4,000 paratroopers, but I only had six doctors,” Gibson said. The Army also had six physician assistants and about 100 medics, but the devastation was spread through a major city and into remote neighborhoods.

Gibson’s paratroopers with the 82nd Airborne Division removed rubble, distributed food and water, and helped set up shelter for earthquake survivors. Each night, the paratroopers updated Ruiz’s group about other camps or communities that still needed medical assistance.

“These were neighborhoods in the outskirts of Port-au-Prince that were difficult to get to because of the rubble,” Ruiz said. “And we would form teams and go out into the field and provide treatment. Oftentimes, I would find individuals with open fractures who had not been attended to.”

Gibson and Ruiz barely knew each other during the month each spent in Haiti, but they decided to reconnect last year.

They had lunch a few weeks after Ruiz took office in January as the Democratic successor to Republican Rep. Mary Bono, whom Ruiz unseated in a Southern California district that covers eastern Riverside County.

Gibson, a two-term Republican who retired from the Army shortly after his Haitian deployment, represents a swing district covering New York’s Hudson Valley and Catskill Mountains.

Both are members of No Labels, which focuses on finding bipartisan agreement on non-controversial topics.

“This is the first step of a great working relationship,” Ruiz said of their effort.