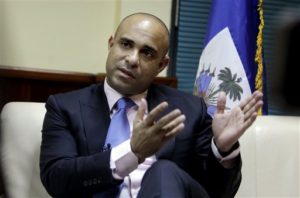 FILE – In this Dec. 29, 2011, file photo, Haiti’s Foreign Affairs Minister Laurent Lamothe speaks during an interview in Port-au-Prince, Haiti. Haitian lawmakers ended a nearly two-month impasse by picking a new prime minister for the Caribbean nation still trying to recover from the 2010 earthquake. The Chamber of Deputies voted on Thursday, May 3, 2012, 62-2 for Lamothe to serve as Haiti’s head of government. Two abstained. (AP Photo/Dieu Nalio Chery, file)