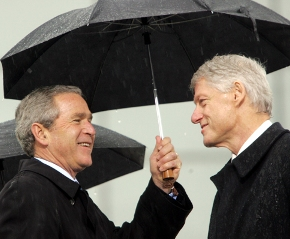 Former Presidents Bill Clinton and George W. Bush will travel to Haiti next week to meet with government officials and others who are involved in the restoration efforts after the country was hit by a 7.0 earthquake in January.

The two will make the trip on behalf of the Clinton Bush Haiti Fund, which was established in the aftermath of the earthquake to help raise money for long-term recovery and rebuilding.

According to a statement, the two former presidents will “meet with Haitians, the government of Haiti, and others providing assistance to earthquake survivors, with the goal of further establishing long-term recovery and rebuilding efforts.”

The earthquake hit Haiti on January 12. According to Haitian officials, at least 220,000 people were killed, around 300,000 were injured and around 1 million were left homeless by the quake.

Though this will be the first trip Clinton and Bush have made to Haiti together, Clinton has already made two trips by himself since the quake hit in his role as UN Secretary-General Ban Ki-moon’s special envoy to Haiti.