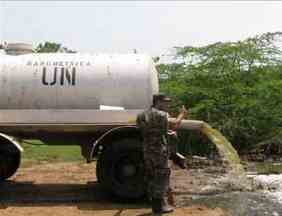 MIREBALAIS, Haiti — An old man with sunken cheeks is so dehydrated he must be carried down the dirt lane to a clinic where the air is thick with the odor of bleach. Minutes later, a worried father enters, carrying a two-year-old girl in a frilly white dress, her eyes sunken and unfocused.

Such scenes are once again common in Haiti where a deadly cholera epidemic that swept the country last fall has returned, fueled by weeks of heavy rains that have helped spread the waterborne bacteria that flourishes in the country’s rivers and rice fields.

The treatment center in Mirebalais, a dusty crossroads town a one-hour drive north from the capital, Port-au-Prince, is again seeing dozens of new patients a day, many arriving at the edge of death from dehydration.

The center saw a fivefold jump from April to May and it hasn’t let up since, said Louise Ivers, senior health and policy adviser to the U.S.-based Partners in Health, which runs the clinic in association with the Health Ministry.

“When people come here, they’re in critical condition, ready to die,” said Francole Adonis, who registers the new arrivals at the center. “They’re collapsing in the yard. The situation is horrible.”

The number of new cases each day spiked to 1,700 day in mid-June, three times as many as sought treatment in March, according to the Health Ministry. The daily average dropped back down to about 1,000 a day by the end of June but could surge again as the rainy season develops.

The epidemic began in rural Haiti last fall, likely brought by U.N. peacekeepers from Nepal. It swept through the countryside of an impoverished nation already overwhelmed by a January 2010 earthquake that left hundreds of thousands homeless and by political instability following disputed elections.

Cholera has sickened at least 370,000 people and killed more than 5,500 since the outbreak started in October, according to the Health Ministry. The precise total is unknowable since many Haitians live in remote areas with no access to health care. The disease is relatively easy to treat if people can get help in time.

When the outbreak began, foreign volunteers descended on Haiti to staff rural clinics and help provide access to clean drinking water. Many feared it would devastate Port-au-Prince, where hundreds of thousands of people were living in densely packed refugee camps. But people in the capital had access to latrines and potable water, thanks to the huge international aid effort, and it was spared the worst of the disease.

The disease faded in winter and spring, when rain is less frequent, and many aid workers moved on. U.N. troops in Haiti turned their attention to the country’s many other pressing problems.

Now there is a fear among aid workers who remain that there won’t be enough resources if the latest surge gets much worse.

“If the cases continue on the same path we could see a lot of health-worker fatigue,” said Cate Oswald, a Partners in Health coordinator. “The health care force is already stretched thin.”

Oswald recalled how volunteers were everywhere during the first response to the outbreak, providing supplies such as bleach, which is sprayed on shoes and throughout the centers to prevent the spread of cholera.

“At one point we were worrying about too much duplication of efforts,” Oswald said.

“Then the rains started coming.” Oswald paused. “And cholera was still here.”

The rains have deluged the Caribbean, including Haiti, in recent weeks. The rivers of the Artibonite, where rural Haitians drink, bathe and wash their clothes, are flowing through a valley ringed by chocolate-brown mountains, and cholera is again raging in the region.

“Sometimes, it’s 50 patients a day. Sometimes it’s 200 patients a day,” Pierre-Marie Cherenfant, a Mirebalais doctor who oversees the clinic, said of the flow of cases coming to the facility.

Smaller treatment centers throughout Haiti’s Central Plateau are also reporting sharp increases in recent weeks, though the most recent breakdown for Mirebalais is not yet available, Ivers said.

There are signs of a growing problem in Carrefour, a large and crowded city on the right at the western edge of the capital. Treatment centers there were reporting more than 300 new cases a day in early June, more than twice what they were seeing back in November, according to the aid group Oxfam.

An emergency latrine built in Carrefour collapsed as heavy rains fell and the waste spilled into a camp, according to a June report by the U.N.’s shelter cluster.

UNICEF’s Mark Henderson, head of the U.N.’s water and sanitation response, said many non-governmental organizations tapped into earthquake-related funds in the fall in a desperate effort for treatment and prevention. That money is no longer available.

“The initial funding that everybody received has come to an end,” Henderson said.

Though the number of new cases is again rising, Health Ministry statistics show the number of deaths is far less than what it was during the initial surge. On a single day in mid-December, about 110 people died, compared to almost 20 in a single day in mid-June, according to the Health Ministry. The mortality rate is now under 2 percent, half what it was when the outbreak started.

The reason for the lower percentage of deaths is that people aren’t waiting to get better, as many did when the disease first emerged, and instead are rushing for help. A public health campaign has featured radio jingles and text messages to educate people about the disease.

Haiti had never had a reported cholera outbreak until October but the initial cause of the outbreak is now no longer so mysterious.

This month, an article in the U.S. Centers for Disease Control and Prevention journal said evidence “strongly suggests” that a Nepalese peacekeeping mission, based in Mirebalais, inadvertently imported the disease. The article points to “an exact correlation” in time and place between the arrival of a Nepalese battalion from an area of its South Asian homeland that was experiencing a cholera outbreak and the appearance of the first cases in a river a few days later.

The treatment center in Mirebalais started as a single one-story building. It quickly grew to include several large tents and temporary shelters, and now they are expanding again.

“When you’re here, that’s what you have to do to save lives,” Jean-Philippe said.