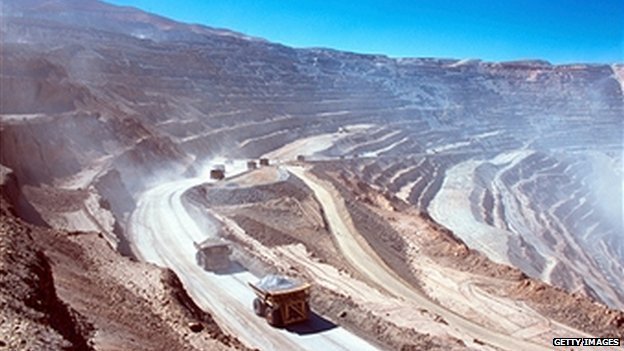 In 2012 US Geological Survey statistics ranked Chile fourth in the world for untapped gold reserves, after Russia and ahead of the United States.

Chile’s supreme court has halted the development of a gold and copper mine owned by the Canadian conglomerate, Goldcorp, until indigenous communities are consulted.

The court upheld an appeal filed on the El Morro mine by the Diaguita community in northern Chile.

The community said the mine, worth almost $4bn, could pollute a local river.

In April, a lower court rejected the Diaguita’s request to halt the project because, the community said, Goldcorp had not conducted proper consultations with local communities.

In an interview with Associated Press, a Diaguita leader, Maglene Campilley said after the Supreme Court ruling, “The Diaguita people are happy that justice is on the side of the humble, of those who defend Mother Earth, our water resources and our indigenous land.”

A fresh consultation will now need to take place before an environmental permit can be awarded allowing mining to take place.

Goldcorp has had to suspend construction at the El Morro site twice, once in 2012 and then again in November of 2013.

A company spokesperson, Christine Marks said, “The company remained committed to open and transparent dialogue with its stakeholders and to responsible practices in accordance with the highest applicable health, safety and environmental standards.”

Last year, Chile’s environmental regulator blocked work on the massive Pascua-Lama gold mine run by Barrick Gold, straddling the Argentina-Chile border after Diaguita communities living in the foothills of the Andes downstream opposed it.

In 2012 United States Geological Survey statistics suggested Chile is now fourth in the world in terms of untapped gold reserves, after Russia and ahead of the United States.

COMMENT: HAITIAN-TRUTH.ORG
This could happen to Haiti if requests to mine natural resources are allowed.
The profits go elsewhere while the nation suffers.