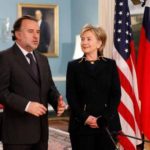 The MERCURY News:PORT-AU-PRINCE, Haiti—A career Chilean diplomat has taken up his post as head of the United Nations peacekeeping mission in Haiti.

Mariano Fernandez Amunategui (Ah-mu-NA-te-gee) is the special representative of U.N. Secretary-General Ban Ki-moon. He replaces Edmond Mulet, a Guatemalan diplomat who left the job in late May.

Fernandez will oversee the U.N. mission that was sent to Haiti in 2004 to stabilize the poor Caribbean country after a violent rebellion toppled former President Jean-Bertrand Aristide and sent him into exile.

1 thought on “Chilean begins as UN peacekeeping chief in Haiti”