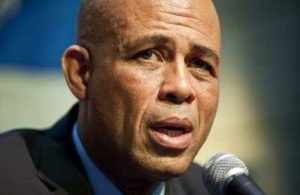 `A subterfuge used to trick, deceive or evade.’

Michel Martelly has won an unbelievable majority in his election against Mirlande Manigat.  This should not come as a surprise for those who know Manigat’s actual popularity, not the popularity generated by the false BRIDE polls created by Reginald Boulos, President of Haiti’s Chamber of Commerce.

Manigat was a few points below dogcatcher, sharing the bottom few slots with Jude Celestin, another person who  benefited from the criminal Boulos polls. Boulos also benefitted through the purchase of 100 vehicles, from his car dealership, via Preval/Celestin and a passport for his brother, Senator Rudi Boulos, making him a real person once more.

Marftelly was actually third or fourth in the real popularity polls, behind Jean Henry Ceant and Charles Baker.

And so the massive majority of Haiti’s youn got organized behind Martelly – AND VOTED!!!

Without getting into personal attacks, for character shortcomings – both candidates are far from perfect – Martelly won the election – hands down!!

Now a new game is being played.

Many of Martelly’s backers did not possess Voter Registration Cards, because their original party – LAVALAS – was barred from the process and they did not bother to register. However, the Electoral Law provides for this. Those left off the list can file a Verbal Process and be accepted. However, the process requires a number of signatures, in order to be valid.

Preval told his CEP and their poll workers, to complete the Verbal Process papers without the requisite number of signatures. Then these could be, and will be, challenged as invalid.

This is CHICANERY at its worst. The majority of Haitian voters, and many poll workers, must depend upon others for proper translations of written documents.

What a criminal shame for those who can read to steal the rights of their fellow Haitians, by challenging on these immoral issues.

If this foolishness is allowed to preval, the nation will blow up. Many, Many will dies as a result and – hopefully – among the numbers of those killed – will be those who cheated their fellow Haitians, and the Nation of any chance to move forward.

Bad is better than worse/.

Martelly – for all his flaws – won a stunning victory and must now be given the chance to succeed. Everyone should help, not hinder the new government.

9 thoughts on “CHICANERY: INTELLECTUALS – PEOPLE WHO CAN REED AND RITE PLAN TO STEAL LANDSLIDE MARTELLY ELECTION FROM THOSE WHO CANNOT”