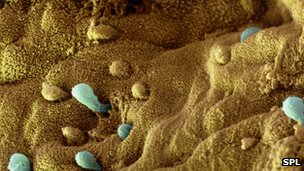 Entamoeba histolytica in the gut cause dysentery

A cheap drug, which is already prescribed for arthritis, could fight amoebic dysentery, according to researchers in the US.

They were testing old drugs to see if any killed the dysentery bug.

Tests on animals, published in Nature Medicine, showed that auranofin was 10 times more effective than the best drug currently available.

Further studies will be needed in humans, but researchers say it holds great promise.

Amoebic dysentery is caused by Entamoeba histolytica, which infects the bowels. It results in severe diarrhoea including bloody stools. More than 70,000 people are thought to die from the disease each year – most are in developing countries.

US researchers tested 910 drugs, some of which had already been shown to be safe for human use, on amoebas in the laboratory.

It showed that auranofin was much better than the current treatment, metronidazole, at killing Entamoeba histolytica.

Follow-up experiments showed that it was also more effective at treating mice and hamsters which had been infected with the ameoba.

In useIt has been prescribed to patients with rheumatoid arthritis since 1985.

One of the researchers, Prof James McKerrow, from the Sandler Center for Drug Discovery at the University of California, San Francisco, said: “When we’re looking for new treatments for the developing world, we start with drugs that have already been approved.

“If we can find an approved drug that happens to kill these organisms, we’ve leapfrogged the development process that goes into assessing whether they are safe, which also makes them affordable throughout the world.”

Prof Sharon Reed, from the University of California, San Diego, said: “Because auranofin has already been approved for use in humans, we can save years of expensive development.

“This new use of an old drug represents a promising therapy for a major health threat.”

Dr Graham Clark, a reader in molecular parasitology at the London School of Hygiene & Tropical Medicine, said metronidazole was very effective, but it did have side effects and was not always successful.

He said: “The work presented in this paper is particularly useful as it identifies an existing drug, auranofin, that has already been tested and approved for use in humans, which seems to be at least as effective as metronidazole.

“Although auranofin has to date only been tested in animal models of amoebic disease, this means that there is now a potential alternative treatment for individual cases where metronidazole fails to cure the infection or in the event resistance to metronidazole emerge as a clinical problem in the future.”