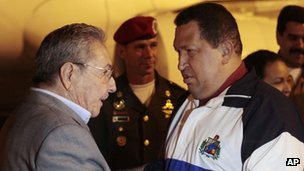 Venezuelan President Hugo Chavez has returned to Venezuela after undergoing a further session of cancer treatment in Cuba.

Mr Chavez, who is running for re-election this year, said his second session of radiation treatment had gone well.

He had surgery in February to remove a second tumour from his pelvic area.

President Chavez arrived in his home state of Barinas late on Wednesday.

“There has been no adverse reaction to the treatment. All the exams that have been carried out have shown positive results of physical recovery,” he said.

The exact nature of his cancer has not been disclosed, fuelling rumours that his health may be worse than officially stated.

Mr Chavez, who has made it clear that he would be “coming and going” between Venezuela and Cuba during his treatment, says he is determined to overcome the cancer – and win October’s poll.

Last year, he had surgery and four rounds of chemotherapy in Cuba, after a baseball-sized growth was detected in his pelvic region.

After the treatment he had said he was free from cancer, only to suffer a recurrence that required surgery in February.