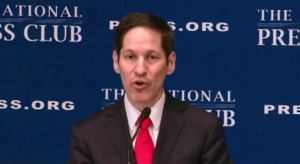 The Centers for Disease Control and Prevention (CDC) warns that the government needs to take immediate action before we live in a world where life-saving antibiotics are no longer effective.

“Every day we delay it becomes harder and more expensive to fix this problem,” said CDC Director Thomas Frieden Tuesday.

Frieden says the healthcare system needs to improve how it detects patients with drug-resistant infections, controls the spread of such infections, prevents them from happening in the first place and incentivizes drugmakers to develop new antibiotics.

“We talk about the pre-antibiotic era and the antibiotic era; if we’re not careful we will soon be in the post-antibiotic era,” he said. “And, in fact, for some patients and some pathogens we’re already there.”The CDC is launching a new system this week that lets hospitals track all the antibiotics dispensed and look at real-time patterns of antibiotic resistance, so doctors can narrow down which antibiotics are most likely to work.

Frieden warns that 23,000 Americans die from drug-resistant infections annually. He also said hundreds of thousands of cancer patients rely on antibiotics after chemotherapy because their immune systems become compromised.

Even though Congress has passed laws to give drugmakers more incentives to develop new antibiotics, such as longer patent exclusivities and faster pathways to get their drugs on the market, they have been reluctant.

“From a strictly business standpoint, the terrible thing about antibiotics is they cure people,” Frieden said. “That’s not a model for a highly lucrative pharmaceutical product — you want a product that has to be taken for a long, long time.”

He said the government needs to work with the industry to come up with even more incentives to push antibiotic research and development.

The CDC says every hospital should have an “antibiotic stewardship program” that tracks how antibiotics are used to try minimize overuse of the drugs, which can lead to drug resistance.

“We’ve done a study that says about a third of all antibiotics used in this country are either unnecessary or inappropriate,” Frieden said.

Frieden also touted an initiative in the president’s budget to develop regional centers that would cost $150 million over five years. The centers would advise doctors if their patients have a drug-resistant infection faster and develop a bank of drug-resistant bacteria that drugmakers can use to develop new antibiotics.