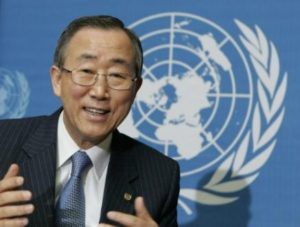 “The upcoming November elections will also be fundamental for ensuring Haiti’s democratic future. It is essential that they are transparent and credible,” said Ban, the first UN Secretary General to address the Caribbean Community (Caricom) leaders at their annual summit.

He said that the UN is working with its international partners to support the electoral effort in the French-speaking nation and was grateful for Caricom’s support in that regard.

President Rene Préval has announced November 28 as the date for presidential and legislative elections and also issued a decree mandating the Caricom country’s  Preval-controlled nine-member Provisional Electoral Council to prepare for the presidential elections. One of Preval’s mistresses, a lady named Cherubin, is a member of the current CEP. Preval’s first cousin headed an earlier one.

The upcoming general elections are likely to cost US$44 million and last month, delegates attending a donor’s summit in the Dominican Republic discussed ways to finance the elections.

The Haitian president said that he was thankful to Caricom for the support shown to Haiti since the catastrophic earthquake.

Don’t want to sound like a broken record but the Secretary General’s request for real elections is at odds with his personal Special Representative to MINUSTAH – Edmund Mulet.

Mulet said: “I have to go along with this, but there will be no election.” He then went on to say that insecurity and technical problems would be the excuses used to derail the process.

You cannot have it both ways.

I personally believe that Mulet spoke the truth, not knowing a taper recorder was running. The UN does not want elections that may return a president they cannot control.

That is why Edmund Mulet is supporting Preval’s plan to install a puppet that can be controlled.

We need an independent Electoral Council.