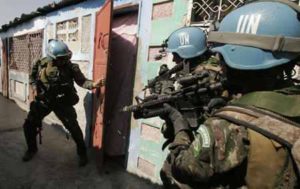 MONTREAL — In the chaotic days following the Haitian earthquake, the Canadian government feared the country was at risk of a popular uprising, according to secret documents obtained by The Canadian Press.

As Haitians await results of the recent presidential election, the documents from the Department of Foreign Affairs detail Ottawa’s deep-seated concerns about the Caribbean nation’s leadership in the two months following the January 2010 earthquake.

They refer to Haiti’s “constitutional no man’s land” and the need to affect a “real paradigm shift” in its political system.

Obtained through access-to-information legislation, the documents suggest Ottawa’s response to the crisis was in large part driven by concerns for the stability of the Haitian government.

“Political fragility has increased the risks of a popular uprising, and has fed the rumour that ex-president Jean-Bertrand Aristide, currently in exile in South Africa, wants to organize a return to power,” says one briefing note marked “Secret.”

The document adds that helping Haitian authorities was necessary “to keep the Haitian public’s trust and to contain the risks of a popular uprising.”

Canada ultimately deployed 2,000 soldiers to help with the rescue effort.

Aristide returned to Haiti earlier this month, against the wishes of the United States and just days before the second round of voting in the presidential election.

The former leader had been living in South Africa since being ushered from Haiti in 2004 by international forces, including Canadians, who stood by as a violent anti-Aristide uprising approached Port-au-Prince.

Canada has played a key diplomatic role in Haiti since then, rallying international support for the governments that followed Aristide’s. It has given Haiti $555 million in aid in the last five years.

Coupled with the return of another divisive figure, one-time dictator Jean-Claude Duvalier, many in the international community warned Aristide’s presence would further disrupt the electoral process.

Aristide’s old political party, Fanmi Lavalas, has been barred from taking part in elections, even though he remains popular with Haiti’s poor.

But in what may be a surprise for critics of Ottawa’s Haiti policy, the documents reveal Canada has been arguing for the group’s return to the political process.

Ottawa’s position is stated as seeking a compromise so that “Fanmi Lavalas can participate in legislative and presidential elections,” putting it squarely at odds with the outgoing Haitian regime led by Rene Preval.

Preliminary results from the second round of voting in the presidential election were originally expected to be released on Thursday, but officials say they are likely to wait until Monday in order to deal with a “high level” of fraud and other irregularities.

Final election results are due April 16.

Results from the first round of voting kicked off several days of riots when government-backed candidate Jude Celestin did better than expected.

Haiti’s international backers eventually pressured electoral officials to have him dropped from the second-round ballot.

The contest is now between Michel Martelly, a popular carnival singer who goes by the name “Sweet Micky,” and Mirlande Manigat, a well-known political figure and former first lady.

The winner will lead a country in dire straits. Little has been accomplished in terms of reconstruction and health workers are still struggling to stem a cholera outbreak.

Foreign Affairs officials painted a bleak picture of the challenges posed by the aftermath of the earthquake.

“Haiti… faces a political void, rendering it vulnerable to a number of threats including criminal gangs as well as political spoilers and manipulators,” one briefing reads.

The country’s new leader will also have to deal with the ambitions of foreign patrons, including Canada.

In one briefing note, Canadian government officials call for a reconstruction effort that “will involve a fundamental, structural rebuilding of society and its systems from the ground up, beginning with the very fabric of society.”

They add that “while overcoming a legacy of elitism, corruption and polarized socio-economic classes will be a formidable feat for Haiti, creating a society which is more inclusive, empowered and engaged is critical to building a strong and prosperous country in the long term.

I think many of the problems have been caused by Aristide himself, as he purposely clouded the issue so as to retain control himself, never wanting anyone to carry the torch in his absence.

He demonstrated this with finality, when he did not endorse Jean-Henry Ceant in the November 28 election. Had he done so, Ceant would be president now and Aristide’s own future assured.

As it is now, other than the few fanatics, would-be Lavalas supporters, among Haiti’s vast majority, have turned to Michel Martelly.  Aristide was these peoples’ possible solution but, as he sat in exile, doing nothing for them, they were willing to stand by, until an alternative appeared. And that alternative is Martelly.

Ask a 1000 poor Haitians about Aristide and they will tell you what they think. They are thinking Martelly is NOW and Aristide is the past.

Knowledgeable observers believe that a Martelly win will make Aristide a memory.

A Manigat win will prove to be so disastrous that Aristide – with Preval’s proposed Constitutional Amendment – will be the next president.

For better, or for worse, the people, the real majority and not those who eat well and drive big cars, are committed to Martelly in a way that has never been seen before, not even during Aristide’s first glow.

The Lavalas voters are represented now, but not with the Lavalas title.

In other words, the people are not excluded. They have found someone to represent them – Martelly. Some do not have Voter Registration Cards, but they have an emotional commitment to a candidate they want in office.

The exclusion argument has no validity anymore.

Aristide, and his fanatical core have excluded themselves – not those who have blindly followed since 1990.

Aristide is thinking long-term, but his long-term may end on April 16 with a Martelly win.