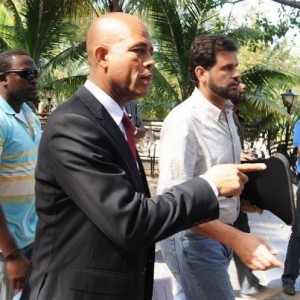 PORT-AU-PRINCE — As a politics-weary Haiti begins the final push toward next month’s presidential elections, many here doubt that the process would be free from the chaos, fraud and controversy that plagued the first-round of voting.

“We don’t know how the second round will shake out ,’’ said Rosny Smarth, an opposition leader and former prime minister, who is among those still calling for a full annulment of the Nov. 28 elections. “We’ve arrived at a situation today where whether the second round goes well or not, the international community will impose a president.’’

Earlier this month, under heavy pressure from the international community to adopt a controversial Organization of American States report, Haitian elections officials upheld Martelly’s claims that he had finished in second place. The decision reversed elections officials’ preliminary ruling that Martelly had been edged out by government-backed candidate Jude Celestin. But while the council requires a majority to proclaim the final results, only four of the eight members signed-off on them leaving the elections vulnerable to legal challenge, some contend.

But the U.S. and others in the international community have moved on to the runoff. The State Department’s top diplomat for Latin America, Arturo Valenzuela, recently told Congress the Feb. 3 announcement “was an important milestone in the electoral process.’’ As a result, he said, “the United States stands ready to assist Haitian electoral authorities in the next round of elections.’’

Still, some wonder whether salvaging the presidential elections without bringing the same kind of scrutiny to the legislative elections, which were also marred by irregularities and fraud, risks setting off a future crisis.

“Democracy in Haiti has taken a huge step back,’’ Smarth said. “And if there is no democracy, eventually there will be an explosion and crisis after crisis. At some point in the future, there will be a problem because these elections were not done according to democratic principles.’’

Last week, both Manigat, 70, and Martelly, 50, officially launched their runoff campaigns. Among those who initially called for cancellation of the vote — they later reversed their positions after realizing they were leading in the polling — each expressed optimism about the runoffs but said they remain concerned about the integrity of the electoral process.

The launches were as different as the candidates themselves whose agreement to avoid personal attacks quickly vanished as Martelly’s camp criticized Manigat’s age and lack of savvy about social media. Manigat’s camp fired back on the issue of immorality, citing Martelly’s penchant for dressing in a skirt and mooning fans when he performs.

“We are practicing serious politics,’’ said Manigat, who launched her campaign with a news conference at the quake-destroyed Montana hotel. “I will lead a campaign and government that is serious, competent and open to everyone,’’ she said.

Criticized for being more comfortable in French than Creole, and distant from Haiti’s poverty-stricken masses, Manigat used the first days of her campaign to answer her detractors. While she responded to the foreign press in English and Spanish at the news conference, she announced to the Haitians press that she would speak in Creole.

One day later, she picked a popular slum neighborhood, once a stronghold of former President Jean-Bertrand Aristide, for her first rally. Hours earlier, about 4,000 Aristide supporters marched in the area to “welcome’’ his return from exile in South Africa, and threatened to disrupt the runoffs if he’s blocked from entering Haiti.

“I know your problems. I know your pain. I am a mother,’’ Manigat told the crowd, adding that she was ready to “wear iron underwear’’ to battle for their interests.

Hundreds of miles north, thousands gathered in Cap-Haitien to hear Martelly. The rallies took on a carnival-like atmosphere as a pink-clad Martelly spoke of national production, education and the importance of family. In between, he offered updated tweets to his 7,189 Twitter followers and posted photos on Facebook.

At his side throughout was Haitian-born hip hop artist Wyclef Jean, whose coveted endorsement was announced a day earlier. Observers say it will help solidify Martelly’s appeal among Haiti’s large young population.

Sitting with Jean, a long-time friend and musical collaborator, Martelly said his campaign is going “to bring joy, to bring music, to bring love, to bring peace, prosperity, development and change in every corner of the country of Haiti.’’

But whether either candidate can excite Haitian voters enough to win with a popular mandate was unclear.

“These elections are far from perfect,’’ said Carlos Westendorp, former foreign affairs minister of Spain who now serves as secretary general of the Club of Madrid. The forum of former world leaders visited Haiti last week to meet with both candidates, elections officials, business leaders and President René Préval on the upcoming vote.

“There will be some voices who will protest against the elections and criticize their legitimacy. That is inevitable,’’ Westendorp told The Miami Herald. “But the most urgent thing is that they are carried out properly and reconstruction can begin.’’

Whomever is elected president will inherit a situation in which charity is more common than jobs, recovery and reconstruction from the earthquake have been moving at a snail’s place, and a deadly cholera epidemic is killing thousands of Haitians, especially in remote areas inaccessible by roads.

Then there is the overwhelming power of the international community, which is not just picking up most of the $30-plus million election tab but has pledged more than $10 billion over 10 years in quake-rebuilding support.

“Irrespective of who becomes president, the room for maneuver that he or she will enjoy will be extremely limited,’’ Robert Fatton, a Haiti expert at the University of Virginia said. “The immediate question is whether either candidate can offer a program of development and reconstruction that can draw a large electorate and grant some legitimacy to the process.’’

Fatton worries that despite the elections’ historic nature, Haiti could find itself with an election marked by even lower turnout than the 1 million who voted in the first round.

“The March elections are unlikely to eliminate current uncertainties,’’ he said, “they may well exacerbate them.’’