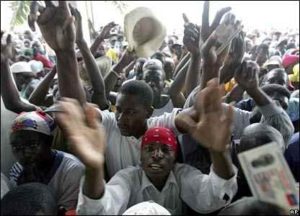 A day before results from the disputed first round of the elections are published, some U.S. lawmakers and Haitian groups added their voices to the calls for another vote. Feb 2, 2011
BY JACQUELINE CHARLES
jcharles@MiamiHerald.com

As Haitian elections officials prepare to announce the first-round results of the country’s chaotic and disputed Nov. 28 elections, calls continue to mount for a new vote.

The Congressional Black Caucus’ foreign policy task force on Tuesday called on “the United States and the international community to uphold the ideals of fairness and support a new Haiti election process that is free and fair, respecting the rights of the Haitian people.” Also calling for new elections are 19 Haitian and international organizations.

They are calling on the Obama administration to “cease supporting” recommendations from the Organization of American States that suggests the legislative and presidential elections could be salvaged with an improved second-round and by switching of placements of the third- and second-place finishers announced in the preliminary count.

Preliminary results had government-backed candidate Jude Célestin headed into a runoff with longtime opposition leader and former first lady Mirlande Manigat. The OAS report suggests that the runoff should be between Manigat and popular singer, Michel “Sweet Micky” Martelly, after a controversial review of 919 of 11,000 tally sheets.

Experts recommended that 234 tally sheets be excluded as being irregular or fraudulent, which put a difference of .3 percentage points between Martelly and Célestin.

“Though it may take a few more months to meet the necessary conditions for such elections to be held, the benefits for Haitian democracy and recovery far outweigh the potential costs,” the U.S. groups said in a statement.

In recent days, a number of religious leaders in Haiti have joined the Group of 12 presidential candidates in asking President René Préval to scrap the first round. Préval has floated the idea of canceling just the presidential portion — a move that has been rejected by the United States and others in the international community.

Meanwhile, the Group of 12 and political opposition want to meet with Préval to discuss the handover of power to a transitional government in the coming days.

Haitian elections officials have designated March 20 as the day of the runoffs.

They can either accept the OAS recommendations, confirm the initial results of the presidential race or decide that there is a statistical tie for second and declare a three-person runoff.

Any decision to cancel the election would come from Préval, who has not said whether he would cancel the entire elections.

On Tuesday, the United Nations peacekeeping mission in Haiti warned employees that the security situation could deteriorate Wednesday and they should make preparations.