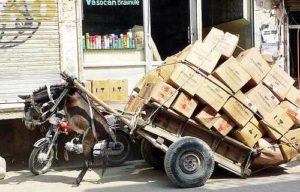 On the eve of the third anniversary of the earthquake that devastated Haiti in January 2010, the country remains in a fragile state. Billions of dollars in aid and lofty promises to “build back better” have brought it only so far. A recent article by Deborah Sontag of The Times showed, in disheartening detail, the distance between hope and reality.

Ambitious projects are stuck on drawing boards or have been held up, she wrote, “by land and ideological disputes, logistical and contracting problems, staffing shortages and even weather.” A recovery commission led by the Haitian prime minister and former President Bill Clinton was meant to oversee the great rebuilding, but was slow to get started and is now defunct, with not much to show for its 18-month mission.

The flood of aid has slowed to a trickle; much of what was promised was never delivered or remains undisbursed, or was disbursed but not actually spent, or was spent on things like emergency food, water and tents, which are important but don’t leave a lasting imprint. Money for long-term recovery has proved hard to spend, or slow to show results.

More than $1 billion allocated for Haiti remains in the United States Treasury, almost all of it for recovery, though America is hardly the only donor sitting on unspent aid. And more than 350,000 people who lost their homes that terrible day are still living in tent camps. The rubble has finally been cleared, but building permanent homes has taken a back seat to other matters.

The Times article reads like a catalog of missteps, of old mistakes and new ones that together present — to put the most optimistic spin on it — fresh opportunities to learn. One was the tendency of humanitarian aid organizations to go back to what they had been doing before the earthquake, in areas like sanitation, health, education and transportation, without the guidance of a broad plan and clear priorities for how best to repair the nation. Another failure has been the persistent unwillingness to include Haitians in the planning and execution of projects, leaving them feeling like bystanders in their own country and squandering opportunities to build government ministries and institutions capable of sustaining themselves once the world’s attention and donations are gone.

Most recovery aid has been channeled through foreign agencies, nonprofit organizations and private contractors, a practice that inflates administrative costs and perpetuates cycles of dependency. And then there was the simple and shameful failure of global donors to meet their promises to deliver money and aid.

The State Department and other defenders of the international response point to some progress, like a new industrial park north of Port-au-Prince, the capital, providing the first 1,300 of what are supposed to be many thousands of manufacturing jobs. They say homes are being built, even if permanent ones are rising slowly and expensively. They plead for patience in a country where institutions were weak or nonexistent before the quake, which all but destroyed the government, flattening nearly every ministry and killing 20 percent of Haiti’s civil servants.

Throughout the halting recovery, Haitians have borne up under other severe but unrelated afflictions: destructive storms, food shortages and disease. A recently announced 10-year and $2.2 billion effort to rid Haiti and the Dominican Republic of cholera by improving water and sanitation will require close coordination among the Haitian government, the United Nations, United States and other partners. Senator John Kerry, who has paid astute attention to Haitian issues in the Senate, will be well placed to do so if he becomes the next secretary of state. As long as the miseries continue, the need for the world to get this right remains.