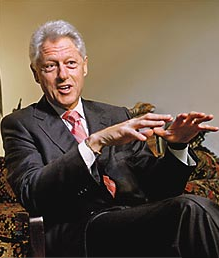 The Transcript of the Two-Way Conversation From National Public Radio

Former President Bill Clinton has emerged as one of the strongest advocates for Haiti. Clinton is the U.N. Special Envoy to the country and co-chairs the recovery committee that will oversee rebuilding in the island nation. President Clinton tells Michele Norris why this effort is different from previous attempts to help Haiti, and why he believes corruption won’t hinder Haiti’s recovery this time. He also talks about recent heated right-wing rhetoric in the U.S.

In his role as U.N. special envoy to Haiti, former President Bill Clinton has emerged as one of the strongest advocates for the Caribbean nation. For the next year and a half, he will also co-chair the Interim Haiti Reconstruction Commission with Prime Minister Jean-Max Bellerive. So it was no surprise that talk of Haiti’s future dominated the third Clinton Global Initiative University meeting in Miami over the weekend.

More than 1300 students from across the country attended the so-called SGIU. In exchange, they made personal commitments to help solve global problems.

Our co-host Michele Norris caught up with President Clinton in Miami, where he urged young people not to adopt old assumptions about Haiti’s dysfunctional government.

President WILLIAM CLINTON: What I think most people dont know, even if theyve been on the ground there, is these people are immensely talented. They have suffered from 200 years of outside and inside abuses and neglect and misgovernment. And a lot of the people whove gone there even to help them in the best of faith, have done so in a way that would never have allowed them to support themselves and to lift themselves up. And now there is a true consensus for and determination for a sustainable, comprehensive, long-term, modern society in Haiti. And they can do it.

Well, following on that, let me put a question to you that some asked at the recent donor conference. Many people asked, why should we have confidence in the Haitian government right now?

President CLINTON: I think why people should have convictions that it will work is, number one, theyve never been willing to do anything like this before. Number two, they have committed to support my implementing the same amount of transparency and accountability here we had in Aceh. Aceh had, if you will, a deeper history of corruption and controversy than we’ve had in Haiti. And what did we do? We set up a website that chronicled every grant that came in from governments or multi-lateral donors, and the big NGO monies going into the country, the NGOs that promised to do it.

Then we chronicled every outflow of every dollar from so everybody could see where the money went. But the most important thing was, by having all this information on the Internet, people like you could follow it and keep up with us and hold us accountable. And when it was over, the people in Indonesia, in Aceh, were so proud that they’d handled all this money in an honest way that it changed the way everyone thought about what government was supposed to be about. So that’s why I think we can go it in Haiti.

BLOCK: I’d like to ask you about developments here in this country. You have talked lately about how you’re dismayed by the lack of civility that you see in the political arena, that words count, that people have to be careful about what they do and careful about what they say. Who should be responsible at this point for trying to turn down the dial and ramp back the rhetoric?

Pres. CLINTON: Well, I think, you know, first of all, this is a country where we have freedom of speech and there are very few limits on it. That’s a good thing. The point I was trying to make is that it is the rule of law, enforced by officials at the federal government, that protect that freedom. And in the exercise of that, just in the last couple of years, we’ve seen the same sort of things that were said in the first two years I was president.

We’ve seen people call the president of the United States an enemy of the state. We’ve seen a minister pray for the president’s demise. We’ve seen many members of Congress threatened. I think that the people who are responsible ultimately are the people that are saying this. So the more responsibility you have, the point I made, and with this huge Internet echo chamber out there, the more responsibility you have, the more careful you have to be not about what positions you’re taking but how you say it.

Remember Timothy McVeigh at Oklahoma City. He did this on the anniversary of the Waco tragedy, where David Koresh, another government-hating guy, had gathered a clan of people and stocked up on weapons and food and asserted the right to violate the law.

And so, my point is, we’ve seen this movie before. This creates an atmosphere in the country where things can happen, and we have already had a deeply disturbed man fly an airplane into an IRS building in Texas. I just don’t want this to get any worse, and we owe that to the people in Oklahoma City taught us something. It sobered America up. It changed us all.

BLOCK: President Clinton, good to talk to you. Thank you so much for your time.

Copyright © 2010 National Public Radio®. All rights reserved. No quotes from the materials contained herein may be used in any media without attribution to National Public Radio. This transcript is provided for personal, noncommercial use only, pursuant to our Terms of Use. Any other use requires NPR’s prior permission. Visit our permissions page for further information.

NPR transcripts are created on a rush deadline by a contractor for NPR, and accuracy and availability may vary. This text may not be in its final form and may be updated or revised in the future. Please be aware that the authoritative record of NPR’s programming is the audio.