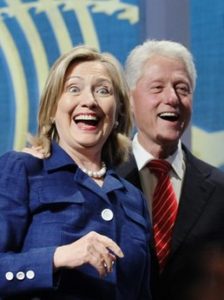 Bill Clinton has already reaped massive commissions, while raping Haiti via his Haitian projects. Now he has been given personal oversight of $1,500,000,000 – yes, that it $1.5 billion American dollars.

This is a case of putting the fox amongst the pigeons.

I mention this because the world seems to have forgotten.

The world now says…almost 200,000 lost their lives while 5,000 were left handicapped.  Pretty soon it will be described as a few dozen dead and one dislocated knee.  This, in itself is a strange agenda…a form of international denial.

People like Clinton are now focused on profitable ventures for themselves, and those close to them. The poor Haitians are ignored to the extent that they are nothing more than an irritant. The focus is on money and how to take as much as possible, while giving as little as possible to  the needy Haitians.

Hillary Clinton sent her spokeswoman, Cheryl Mills, to tell Ambassador Merten that Hillary and Bill did not want elections. They prefer some sort of an Interim, Unconstitutional lash-up, like the incompetent, criminal  Latortue Government they inflicted on Haiti in 2004.

They would favor the pederast Bellerive or lesbian Pierre-Louise.

Is there a message here that I am missing??

Or, perhaps, Madame Manigat, a lady with no popular support who could be easily controlled, as was her husband.

Haitians should not tolerate the game.

Unfortunately, the Haitians are not masters in their own house. They are controlled/occupied by MINUSTAH. There is no grass-roots in Haiti through which the people’s displeasure can be transmitted.

The Clintons are marching to a drummer that is not interested in the well-being of Haiti.

It is time that the foreigners stop trying to stuff bad deals down the Haitians’ throats.  There is a God-given opportunity to actually save the Nation and we are inflicted with bums like Bill Clinton who is disliked by the real majority of Haitians.

Bill Clinton had two terms in which to do something for Haiti but did nothing. Why should we believe he has changed??

As Clinton once said…”Keep it simple, stupid!”

FOLLOW THE MONEY TRAIL – IT WILL LEAD YOU TO THE CRIMINALS  – BILL AND HILLARY.

6 thoughts on “BILL CLINTON GOOSES HILLARY BUT THEY ARE BOTH ABOUT TO SCREW HAITI – AGAIN!!”