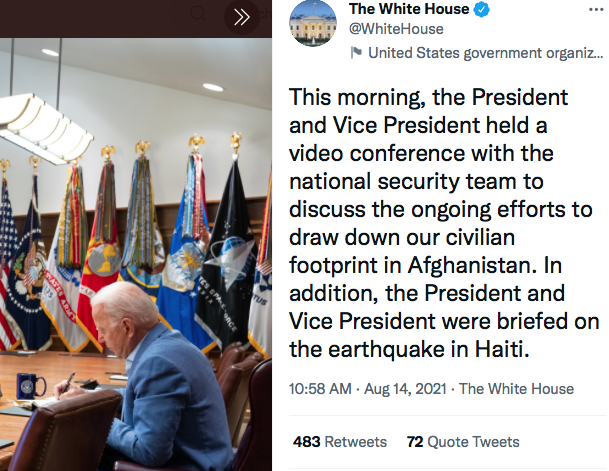 President Biden has authorized U.S. support for Haiti in the aftermath of a massive earthquake Saturday that caused extensive damage and killed dozens of people, with the number of fatalities expected to grow.

A White House official said that Biden and Vice President Harris “were briefed by the National Security Advisor and the Secretary of State on the earthquake this morning in Haiti.”

“The President authorized an immediate US response, and named USAID [United States Agency for International Development] Administrator Samantha Power as the senior US official to coordinate this effort,” the official added.

No additional information was provided beyond the appointment of Power, who under the Obama administration served as the U.S. ambassador to the United Nations.

When reached for comment by The Hill, the White House said it had no further details to provide. The Hill has reached out to USAID for comment.

Over 300 people are dead in Haiti after a 7.2 magnitude earthquake hit the country on Saturday.

Haiti’s Office of Civil Protection said search and rescue teams will be sent out, with at least 304 people confirmed dead from the earthquake, NBC News reported.

“The most important thing is to recover as many survivors as possible under the rubble,” Prime Minister Ariel Henry said.

“We have learned that the local hospitals, in particular that of Les Cayes, are overwhelmed with wounded, fractured people,” Henry added.

The prime minister has set a one-month state of emergency, as many buildings collapsed from the large earthquake.

The earthquake comes 11 years after Haiti was devastated by a 7.0 magnitude earthquake, which the country has still not fully recovered from.

The Haitian government said among those confirmed dead so far was a powerful local politician who had been in a hotel he owned that collapsed Saturday morning.

Haitian Prime Minister Ariel Henry, who was sworn into the position last month following the assassination of Haitian President Jovenel Moïse, tweeted Saturday afternoon that the government would be declaring a state of emergency following the quake.

“We will make the necessary arrangements to assist people affected by the earthquake in the Southern Peninsula,” he wrote, according to an English translation of the French tweet. “We must show a lot of solidarity with regard to the emergency.”

“The government will declare a state of emergency,” he added. “We will act quickly.”

The U.S. Geological Survey previously said that due to the severity of the quake Saturday, the number of fatalities could reach into the thousands, though officials are still working to examine the true impact of the natural disaster.

Videos and photos circulated on social media showed a chaotic scene as local residents ran through the streets and searched the rubble of collapsed buildings for people and personal items that may still be lost.

The disaster comes as Haiti has still not fully recovered from the 7.0 magnitude earthquake that devastated the country in 2010, with roughly $13 billion in aid given to the country in the past decade failing to reach much of the population in the poorest country in the Western Hemisphere.

The country is also plagued by widespread corruption, with Moïse’s assassination and the planning behind it still clouded in mystery, though authorities have already detained 44 people in connection with the attack.