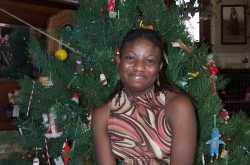 Betsie Gallardo hasn’t gotten very many breaks in life. Born into poverty in Haiti – HIV-positive – she was repeatedly raped by a local police officer until she was adopted by a Christian missionary in the country. And now the 24-year-old orphan is dying of cancer. In prison. Alone.

Betsie’s story was brought to light by gay activist and writer Bill Browning. On his blog, The Bilerico Project, Browning has posted a letter from Betsie’s adoptive mother, Jessica, that claims her daughter is a victim of ignorance – and that prison officials are refusing to allow visits from her family as she battles the final stages of gallbladder cancer.

According to the letter, Betsie ordeal began after she crashed her car soon after taking a Xanax.

“As the police and emergency workers responded, Betsie flashed back to her earlier encounters with the cop in Haiti and went into a panic,” her mother writes. “That’s when my little five-foot-nothing dancer of a daughter decided to resist arrest…. Just over a year ago Betsie was sentenced to five years in prison. Her crime? Spitting on a cop while intoxicated.”

To be more precise, Betsie’s crime was reportedly spitting on a cop while infected with HIV, which the state of Florida considers to be a weapon,” despite the fact that one cannot actually contract HIV from saliva.

Compounding that criminal injustice, last April Betsie was diagnosed with incurable cancer that had spread throughout her body. Attempts to get her released on compassionate medical grounds have so far failed.

But things get worse.

“Three days ago I called down to the prison doctor to check up on Betsie,” her mother writes. “We hadn’t heard from our daughter for about a week and were getting more and more worried. Our fears ended up being justified. Betsie had developed what the prison described as an inoperable bowel blockage. According to the doctor she is no longer able to take in food and from this point forward she will slowly starve to death.”

Officials at Broward Correctional Institution, however, won’t even let Betsie meet with her family members during her final days. Though they have been in to see her twice, the prison warden informed the family not to expect such “special consideration”in the future. When asked if they could be with her during her final moments, “the warden said absolutely not.

“Betsie has been sentenced to die in prison,” Jessica writes. “Why? Because she was born with AIDS and spit on a cop. It was definitely a stupid action, but was it one that warranted that she should die locked up, alone, and away from her family?”

The story is heartbreaking — but you can help bring it to a more happy resolution. Florida’s Executive Clemency Commission has the power to grant Betsie medical clemency, which would allow her to spend her final few days surrounded by her loved ones, not prison guards. You can urge outgoing Gov. Charlie Crist and other members of the commission by signing this petition.

Browning has also provided the following information on how to contact Crist and other commission members:

If Charlie Crist can grant Jim Morrison a pardon, surely he can spare a clemency for someone who direly needs it.