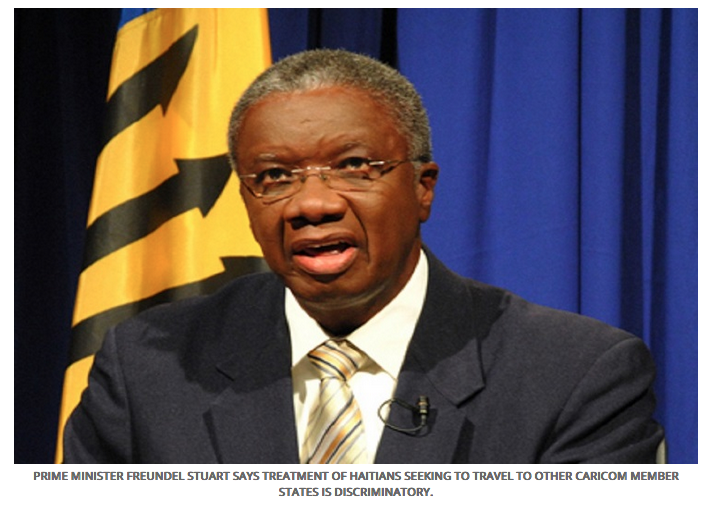 BRIDGETOWN, Barbados, Friday March 2, 2018 Caribbean 360.com – The Government of Barbados has expressed concern that citizens of Haiti have to obtain visas in order to travel to some CARICOM member states, although it is a member of the regional integration movement.

“Barbados has always thought that this was a little inequitable and discriminatory,” Prime Minister Freundel Stuart said as the 19th Inter-Sessional Meeting of the Conference of Heads of Government of CARICOM wrapped up in Port-au-Prince this week.

The Prime Minister argued that the visa requirement was an anomaly in CARICOM arrangements.

He said that Haiti – whose President Jovenel Moise has taken over chairmanship of the regional grouping – had the largest population of all CARICOM members, yet its citizens were being forced to obtain visas to enter most regional countries in circumstances where other CARICOM English-speaking members do not have to satisfy that requirement.

The Barbadian leader disclosed that as a result of his country’s concerns, there was energetic discussion among regional leaders at the just-ended summit, and he believes “the way forward seems much clearer now”.

“The Legal Affairs Committee is being commissioned to look at all the issues surrounding Haiti’s membership and to advise the [Heads of Government] Conference for July as to whether there is any legal basis for denying Haitians rights which all other CARICOM members enjoy,” Stuart told the media.