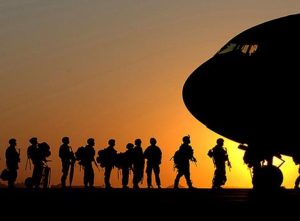 Army Lt. Gen. P.K. Keen traveled to Haiti for a planned two-day visit in January to meet with officials to prepare for the hurricane season, but his trip was interrupted by the earthquake that rocked the country.

Keen, a three-star general, spoke Friday morning at Criser Hall about the U.S. military joining with the international community in response to the disaster and the chaos that made the crisis response so difficult.

Keen is second-in-command of the U.S. Southern Command in Miami, Fla., and was the commander of the U.S. military disaster relief forces in Haiti, called Joint Task Force Haiti.

He was at the residence of the U.S. ambassador to Haiti when the earthquake struck on Jan. 12.

Keen, who received a Master of Arts in Latin American Studies from UF in 1986, said the role of the U.S. military was to support and work together with the international community and the U.S. Agency for International Development, which is the agency that headed up the U.S. relief effort.

“The unity of effort is what we tried to achieve from the very beginning,” Keen said in his presentation.

Keen said the mission of the U.S. military in Haiti was to save lives, reduce human suffering and quicken the relief efforts in Haiti.

President Barack Obama’s decision to give Haiti the full support of the U.S. government and the decision to declassify the whole military operation made it easier for the military to collaborate and communicate with the international community, Keen said.

Before the earthquake, Haiti’s only international airport in Port-au-Prince could handle about 15 aircraft per day.

After the U.S. Air Force took control of the airport, which was done at the request of the Haitian government, the airport was landing about 150 aircraft every day.

“That wasn’t enough,” Keen said. “We probably could’ve landed 500 a day and still not had enough, but that was the most that we could physically put on the ground and manage.”

While the majority of U.S. soldiers in the relief effort have left Haiti, Keen said there are still some there who are continuing to assist the international community in rebuilding and other humanitarian assistance roles.

“I find there is still great frustration in Haiti in various sectors,” Keen said of his experience. When he goes back to Haiti, though, he does see progress in spite of the immense challenge the country faces in rebuilding.