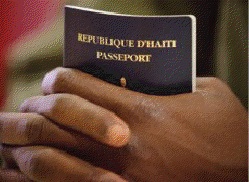 Jean Bertrand Aristide had written last Monday to Marie-Michèle Rey, the Haitian Minister of Foreign Affairs, to ask her to give him a diplomatic passport [information reportedby the Associated Press and the AFP]. That same Monday, an official with the Ministry of Foreign Affairs (MAE) had informed that the Department accepts that this application can be scanned and sent by internet “and that this request will be processed immediately and the original will be sent later”.

It seems now that everything is not as simple, the Ministry of Foreign Affairs judge that the request made by the former President Aristide is insufficient and now requires a notarized letter signed by the former Head of State. Faced this new “administrative problem”, Kurzban, Aristide’s Miami lawyer, is expected to travel to Port-au-Prince this weekend to personally deliver the documents to the administration to allow his client [exiled in South Africa since 2004] to obtain a diplomatic passport.

The insistence of Aristide to obtain a diplomatic passports, masks undoubtedly another reason simply than to hold a valid travel document [Diplomatic impunity? Residence?] since in a statement the Government “wishes to clarify, that an expired passport is not an obstacle to the return of a haitian citizen in its native country. In case where this return involves one or more stops in a third country, obtaining an authorization from these countries may be necessary, that the Passport is expired or not.”