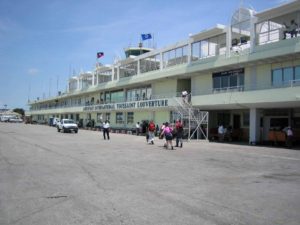 PORT-AU-PRINCE, Haiti — Jean-Bertrand Aristide, the former priest who rose to become the nation’s first democratically elected president before being forced into exile twice, returned home to a calm but uncertain political climate on Friday, only days before a presidential runoff intended to settle months of discord in this rattled nation.

A big cheer rose up from the dozens of Haitian journalists and supporters lined up behind a rope 200 yards from his plane when Mr. Aristide, who left Haiti in 2004 under strong American pressure as rebels closed in on the capital, landed at about 9:05 am local time and stepped back onto Haitian soil.

Some held posters of Mr. Aristide and others clutched small Haitian flags, but the turnout was far below the thousands many had expected to greet him. Throughout the capital, Port-au-Prince, the streets were also quiet Friday morning, with only small clusters of supporters gathered near the airport.

Standing at a lectern in the shade of a veranda steps away from the private jet that carried him home, Mr. Aristide spoke for 20 minutes, mostly in Creole. He did not comment directly on the candidates in the presidential runoff on Sunday, but he criticized the electoral process, denouncing the exclusion of political parties, including his own, Fanmi Lavalas, which officials barred from the first round of voting last year on what was described as paperwork problems.

With Haitian elections tense, fragile affairs in normal times, it remained unclear what effect Mr. Aristide, a polarizing figure beloved by the poor but dismissed by others as corrupt and autocratic, might yield on the country. He has said he is coming back just to work on his educational foundation, but Western diplomats working to keep him out of the country were skeptical given the timing of his return.

“Aristide represents the voice of the poor people here,” said Wadson Pierre, 19, an Aristide supporter waiting outside the airport. “We feel comfortable when he is here.”

Mr. Pierre said he still planned to vote in the runoff on Sunday, even though Mr. Aristide is not on the ballot. The election is the product of months of political wrangling and international intervention after the fraud and violent protests that accompanied the first round last year. But some Aristide supporters said they would take no part in it.

“Since he left, things are difficult for us; I hope his return can change the poor situation here,” said James Fenelon, 25, who is unemployed. “I am not going to vote. I have one leader. It’s Aristide and he is coming today.”

Mr. Aristide is the second major figure in Haitian history to return in recent months: Jean-Claude Duvalier, the former dictator known as Baby Doc, suddenly returned from exile in January and is living quietly here while courts iron out pending human rights and corruption charges related to his government.

With the former archrivals on Haitian soil and the country still reeling from the political crisis it hoped to dispel with a peaceful election, the prospect of Mr. Aristide’s return generated furious diplomatic negotiation, with the United States pressing for a delay in his arrival until after the election.

President Obama had telephoned President Jacob Zuma to prevent Mr. Aristide from leaving his adopted home in South Africa, but to no avail. On Thursday night, South Africa’s minster of international relations and cooperation, Maite Nkoana-Mashabane, joined Mr. Aristide at the airport and wished him “a safe and happy landing” before his plane took off for Haiti.

President Obama had reiterated his concerns through a spokesman on Thursday before Mr. Aristide began his journey home.

“The United States, along with others in the international community, has deep concerns that President Aristide’s return to Haiti in the closing days of the election could be destabilizing,” Tommy Vietor, a spokesman for the United States National Security Council, said Thursday.

South African officials, who oversaw his residence and security, said they ultimately had no cause to hold him. But the South African government remained close-mouthed about the details of Mr. Aristide’s departure right up to the last minute; some members of the Aristide delegation, which includes the actor Danny Glover, said they were uncertain about when or if the flight would leave.

The Haitian government issued Mr. Aristide a diplomatic passport weeks ago and said there was no reason he could not come back. Mr. Aristide’s supporters have spruced up his former residence and banners declaring “Welcome Back President Titide,” using his nickname, have sprung up around here. Mildred Aristide, his wife, said she did not even know if the home was still furnished. “I hope there is a bed,” she said before leaving.

Both candidates in the runoff, Mirlande Manigat, a former first lady, and Michel Martelly, one of the country’s most popular singers, have derided Mr. Aristide in the past.

But, in a sign of his continuing support here, particularly among the poor, they have both sought to neutralize their past opposition.

Ms. Manigat has said he could play a role in her government as an education adviser. A banner, evidently put up by Ms. Manigat’s backers, hangs near the airport, declaring, “You have your mother, now your father is coming.”

Mr. Martelly, who has vulgarly dismissed Mr. Aristide in song, now says he has the right to return.

Kenneth H. Merten, the American ambassador here, said of Mr. Aristide’s return, “He gets to choose whether he will play a positive role here, and I hope that’s his choice.”

Mr. Aristide helped lead a popular revolt that ended the Duvalier family’s nearly 30-year dictatorship. He became president in Haiti’s first democratic elections in 1990, was soon ousted in a coup in 1991 but then returned to power in 1994 after the United States military forced out the military regime.

Mr. Aristide was re-elected in 2000 in an election boycotted by the major opposition parties, and while he inspired great loyalty among the poor he was criticized by many for corruption, an autocratic style of leadership and the violent suppression of political opponents.

Amid an armed uprising, led in part by former members of the Haitian Army that Mr. Aristide had disbanded, he left Haiti on Feb. 29, 2004. He has said American diplomats kidnapped him, but the United States has long denied the accusation.