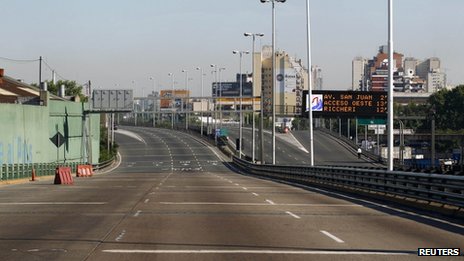 Motorways remained empty, as roadblocks were set up on the main access roads to Buenos Aires

A strike called by two of Argentina’s biggest unions has paralysed much of Buenos Aires and other cities.

Most trains and underground lines remained closed, flights were cancelled and there was little traffic in the streets of the capital.

This is the second big protest against the government of Cristina Fernandez de Kirchner in less than two weeks.

The unions are asking for lower income taxes, and there is general discontentment about the economy.

“I will put up with whatever I have to put up with. No one will bully me.”

There are also concerns about rising crime and corruption.

President Fernandez, who has been in power since 2007, has seen her approval ratings plunge after her re-election a year ago.

The strike was called by two unions that have recently dropped their support to the government, the CGT and the CTA.

It was also backed up by the powerful Argentine Agrarian Federation, which represents the farming sector.

“It feels like Sunday in Buenos Aires, with the cafes and the shops open but generally empty streets in the usually congested central area of the city,” says the BBC’s Vladimir Hernandez.

Union leaders have hailed the strike as a major success.

“There are hundreds of thousands of workers across the country sending a message to a government that closes the eyes to all of us who disagree with them,” said CTA union leader Pablo Micheli.

But the government says people only stayed at home because of the roadblocks and picket lines. 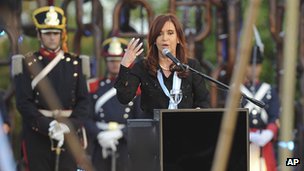 “Luckily the strike was restricted to a few areas in the capital, because people in the rest of the country went to work as usual,” President Fernandez said in her first reaction to the industrial action.

Speaking at a ceremony to mark Sovereignty Day in the city of San Pedro, she also sent a defiant message to her critics.

“I will put up with whatever I have to put up with. No one will bully me: not with threats, not with violence.”

Some economists say annual inflation in Argentina is at 24%, much higher than the official 10% figure.

Most unions are calling for a big rise in the minimum salary and for income tax bands to be adjusted accordingly.

The International Monetary Fund head, Christine Lagarde, has threatened Argentina with a “red card” if it does not provide reliable inflation and growth data by 17 December.

Economic growth in Argentina has dropped from 9% in 2011 to 2.2% this year, according to the World Bank.

Thousands of people marched in the streets of Buenos Aires on 8 November in the biggest protest against the government of President Fernandez so far.

1 thought on “Argentina: Strike paralyses Buenos Aires and other cities”