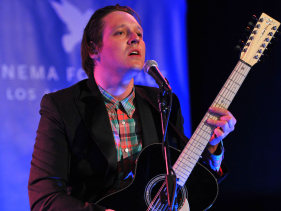 Win Butler seems like a guy who thinks about music.

I say that based on what I know about him (admittedly, very little), though it’s not a stretch to imagine him ranking bands, debating the merits of albums — or, in headier moments, sides of albums — defending the strengths of guys like Roy Thomas Baker, Guy Stevens, Lee Perry and Phil Spector. He knows the histories, the timelines, the family trees. He owns all the records. He believes in inspirational power of the chord or the chorus. When he was a kid, he definitely made mix tapes off the radio.

Of course, Butler isn’t a kid anymore. And as such, he’s probably realized some of the less-desirable qualities of music, too: the inherent divisiveness of genres, the exclusionary nature of scenes, the supposed superiority of tastemakers. He sang about those things at length on Arcade Fire‘s last album, 2010’s The Suburbs — “Now the music divides us into tribes/You choose your side, I’ll choose my side” — and he spends no small amount of time dissecting them on the follow up, Reflektor, too … though this time around, he doesn’t lament them, he lashes out at them.

Over the course of a four-song stretch on Reflektor’s first disc — “We Exist,” “Flashbulb Eyes,” “Here Comes the Night Time” and “Normal Person” — Butler dismisses the judgment of his peers and the press, rails against gatekeepers of the scene and proudly flies his outsider flag. The lyrics strike a defiant tone (“Tell ’em it’s fine/Stare if you like/But just let us through,” “Is anything as strange as a normal person?”) but it’s the music that speaks loudest: Butler and his bandmates cloak their missives in slipstream guitars, disco drums, rumbly dub, planetarium-ready synthesizers, Rara rhythms, plinking piano and percussive flourishes.

On the album’s sonorous, saturnine second side, the band edge into art-rock excesses, with songs that pulse and purr one moment, rapidly curdle on souring strings the next. There is, of course, a hidden track, full of tape effects and womb-like synth thrombs. Yet, it rarely drags, and even on Reflektor’s most involved movement — the two-song suite of “Awful Sound” and “It’s Never Over,” which tells the story of the mythological figures on the album’s cover, Eurydice and Orpheus — Butler is wise enough to wrap it all up with “it’s over too soon.” It’s either sarcastic or sentimental … and no matter how you view it, you’re right.

In essence, over the course of its 75-some minutes, Reflektor manages to be the most inclusive collection of songs imaginable … which, I suppose, is sort of the point.

Because, more than anything else, it represents Butler’s best attempt at taking the touchstone records he grew up with — Low, Remain in Light, Exile on Main Street, Ramones, Graceland, Dark Side of the Moon, Achtung Baby, Revolver, the White Album, — and turning them into one cohesive experience. In that regard (not to mention its two-disc sprawl), Reflektor is nostalgic and slightly idealistic. Yet, at the same time, it also strikes a very contemporary chord: Butler dares to imagines a musical world bereft of boundaries or arbitrary borders … which, come to think of it, is basically 2013.

In a recent interview with the BBC’s Zane Lowe, Butler spoke about playing shows in rural Haiti (his wife, Régine Chassagne, has roots there), and performing for audiences that had never heard the Beatles or the Rolling Stones. It’s clear from Reflektor that the experience stuck with him — imagine the thrill of rewriting rock and roll history — and that revisionist streak powers not just the album, but everything leading up to it: the stripping away of too-serious artifice, the sly commentaries on the unspoken politics of the live show, it’s all part of the plan to remove the idea of context from rock music … the end goal, of course, being to create something entirely new.

It bears mention here that, though he’s dominated this discussion, Butler couldn’t have pulled this off on his own. Sure, Chassagne doesn’t sing lead on any of Reflektor’s tracks, but there are moments — like on “Joan of Arc” and “It’s Never Over” — where her harmonies and icy vocals push things to new heights. Tim Kingsbury and Richard Reed Parry have never wrung so many sounds out of their guitars, Butler’s brother Will proves adept at mastering difficult melodies on the keys, and the drumming of Jeremy Gara has never been better … he clearly feels the influx of Caribbean rhythms throughout. And James Murphy proves that he can coax a beat out of anybody, but also realizes that sometimes, the best thing a producer can do is get out of the way.

Yet, despite that, it’s hard to deny the fact that Reflektor is Butler’s passion project. He is, after all, a guy who thinks about music … which means he’s also smart enough to realize just where his band stands in its hierarchy. They’ve sold out arenas, had #1 albums, won Grammys, and, at this point, have basically established themselves as the band of this generation. Which is what makes Arcade Fire’s latest all the more audacious.

Simply put, Reflektor’s true intent lies in its title. It is literally mean to be a mirrored surface, one that projects the past onto the present. When you look into it, you either see an anachronistic, cracked reimagining of rock’s fractious roots, or an ambitious attempt to cast aside history and create something shiny and new. Ultimately, it’s up to you to decide … though Butler’s certainly made his case for the latter.