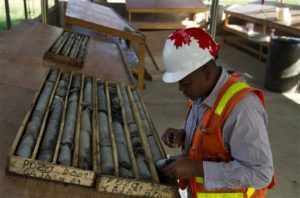 UNITED NATIONS — Haiti’s government hopes to introduce a new mining law within six months that could set royalty rates of between 9 and 12 percent in an effort to ensure that the impoverished country benefits from its mineral wealth, potentially worth $20 billion, the prime minister said Wednesday.

Haiti is seeking to update nearly 40-year-old mining laws in an effort to reap benefits from the little known-industry. The Associated Press reported in May that two mining companies have begun drilling for gold, copper and silver in Haiti’s northeastern mountains. They say testing indicates the metals could be worth $20 billion, potentially an enormous boon for a country whose annual budget is $1 billion and where most people live on less than $2 a day. Actual mining is years away.

The stakes are high,” Prime Minister Laurent Lamothe said in a brief interview with the AP on the sidelines of the U.N. General Assembly meeting in New York. “Haiti needs its own resources.”

Lamothe said Haiti is seeking advice from several countries with important mining industries, including South Africa, Chile and Peru, on policies that would both encourage foreign investment and secure fair profits for Haitians.

Haiti, the poorest country in the Western Hemisphere, is trying to strike a delicate balance. Royalty rates that are too high could send badly needed foreign investment elsewhere. One of the world’s largest gold mining operations is opening in neighboring Dominican Republican. The company will pay 3.2 percent per ounce royalty on net sales, along with other taxes.

Although Haiti’s mining potential has been known for decades, foreigners were unwilling to risk exploring in a country plagued with corruption and chronic instability. Dan Hachey, the president of a Canadian exploration firm now investing in Haiti, Majescor Resources, told the AP earlier this year that he hopes the billions of dollars in foreign assistance promised for recovery from a 2010 earthquake will make the country more accountable.

Lamothe expressed optimism that the new mining law, once introduced, will find support in a parliament that has not always been friendly to President Michel Martelly since he took office in 2011.

The Haitian government is now focused on trying to hold long overdue local and legislative elections. Ten seats in the 30-member Senate are empty because their terms expired in May after elections weren’t held in time.

Lamothe had said in July that elections would be held before in the end of the year but in the interview Wednesday, he acknowledged that might not happen because of difficulties in creating a permanent nine-member election panel to oversee the vote. He said the executive and judicial branches have nominated six members to the panel but parliament still needs to nominate the remaining three.

“Right now, it is out of our hands,” said Lamothe, who took over as Haiti’s No. 2 in April after the previous prime minister resigned only months into the job.

U.N. Secretary-General Ban Ki-moon discussed the need to hold the overdue local and parliamentary election during a meeting with Martelly on Wednesday, the U.N. said in a press statement.

Lamothe said holding the election is “our main objective.”

“We hope it brings stability,” he said. “The people expect it and the country needs it.”