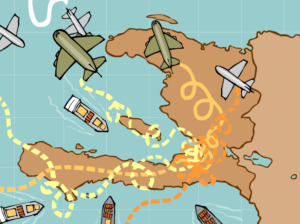 — Washcloths arrived before water, and senators before surgeons. In the first chaotic days after Haiti’s earthquake, some vital aid was forced to wait because the U.S. military took relief flights at the Port-au-Prince airport on a first-come, first-served basis, according to landing logs.

The logs, reviewed exclusively by The Associated Press, document who flew in before and after the U.S. Air Force assumed control of the landing strip that was the sole lifeline for relief. They largely disprove accusations from some humanitarian groups that the U.S. held up aid in favor of military flights.

The Air Force did initially give priority to military units that were sent to secure the airport, distribute aid and keep the peace. But then it started taking flights according to a reservation system open to anyone.

Because of that, key aid was delayed in some cases while less-critical flights got in.

Nearly all the groups sending in aid insisted their load was urgent, said Air Force Capt. Justin Longmire, who has been coordinating the flight schedules and is helping prepare the airport to reopen for commercial flights on Friday.

“Could I take the list of all the flights and put it in order of most important to least important? Water? Food? Digging equipment? Doctors? I don’t think so,” Longmire said.

The result: Church of Scientology ministers landed, as did AP reporters, CNN’s Anderson Cooper and diapers from Canada. But a French portable hospital and planeloads of doctors with medical supplies were diverted to the Dominican Republic.

Planes carrying half of a Norwegian field hospital landed in Port-au-Prince, while those carrying the other half were diverted to the Dominican Republic and had to be trucked in over the mountains, delaying the opening of one of Haiti’s first post-quake field hospitals.

When the quake hit, the global crush of compassion turned the Haitian capital’s airport into a virtual baseball catcher with “pitchers throwing balls from all directions all at the same time,” as Air Force Lt. Gen. Glenn F. Spears put it.

Before the quake, the single, 10,000-foot runway had handled 20 flights a day without radar, with pilots landing visually with the help of controllers on radios. Afterward, traffic on the runway soon rivaled that of any at Chicago’s O’Hare Airport on a busy afternoon, with planes landing or taking off every two minutes.

With the seaport in ruins, hundreds of planes loaded with missionaries, medical teams and military forces dashed to Haiti without designated landing times and only 10 spaces for large planes to park. There was no room on ramps for planes to unload their cargo, and some planes didn’t have enough fuel to leave.

The traffic snarls in the air were exceeded by utter chaos on the ground. For days the airport was packed with aid workers, journalists, airport employees and others with nowhere else to go. They slept on luggage carousels, fought over space for their equipment and dodged rats.

“It was a madhouse,” said Air Force Brig. Gen. Bob Millmann, an adviser on airlift operations in Haiti. “We saw a situation that was untenable, like stuffing 5 pounds of sand into a 3-pound sack.”

Air Force controllers started guiding air traffic a day after the quake and assumed official control from Haitian authorities three days later. They used a system developed in the wake of Hurricane Katrina. It requires pilots to dial an Air Force telephone bank to get an assigned landing time.

“When the Air Force took over the tower, things made a marked turn,” said Jon Fussle, a pilot for the nonprofit coalition Haiti Relief Group.

Rescuers, countries and aid groups complained early on of a bottleneck that kept lifesaving equipment, medical care and supplies from Haitians who were trapped, injured or made homeless by the quake.

They blamed the Air Force as five planes carrying 85 tons of medical and relief supplies from Doctors Without Borders were diverted to the Dominican Republic, and three charter planes carrying water and tarps from the Christian relief organization Samaritan’s Purse were turned back. Doctors Without Borders claimed that the diversions cost lives and forced the organization to buy hardware-store saws in Port-au-Prince for amputations.

However, most of the problems occurred before the Air Force took full control. And the AP review found that at least one Doctors Without Borders plane headed for Haiti without a landing slot, and circled as controllers unsuccessfully tried to squeeze it in.

U.N. humanitarian chief John Holmes commended the U.S. for the system it set up.

“The Americans taking over the Port-au-Prince airport was absolutely crucial,” he said in an interview Wednesday. “Clearly there were some glitches. But I don’t think there was any intention to favor military flights over humanitarian flights. It was simply quite difficult to set up a system that included genuine real-time priorities.”

The waiting list for a daylight landing slot is now about a month long, with about 1,000 planes in line, although those willing to land between 11 p.m. and 3 a.m. can get in much sooner. Pilots said the phone lines are frequently tied up.

The AP reviewed restricted federal logs from Jan. 16, when the Air Force began managing air traffic, to Feb. 8. It also had exclusive access to logs from Jan. 12 to Jan. 16 through FlightAware, a Houston- and New York-based company that tracks air traffic in the United States.

Those logs show that on the first day of Air Force management, 48 flights from the U.S. and 25 from other countries landed. More than half of the American flights were military or government. But the Air Force defends that decision in the name of security, adding that many of the flights also carried aid.

“No one knew what the response of the Haitian people would be to this terrible event, but we knew we had to secure the airport to save lives,” Spears said. “So yes, we did send in men and women with guns, and we have not needed to use them.”

In the days that followed, the balance shifted toward aid: Logs show that 52 percent of planes that landed were from U.S and international non-governmental agencies, primarily the World Food Program but also such organizations as the Mormon Church and the American Red Cross; 22 percent were from the U.S. military, including security personnel and medical teams, and 18 percent were requested by the Haitian government, which gave access to cell phone companies and private planes carrying the president and his wife.

As of Jan. 18, the U.N. World Food Program was put in charge of assigning landing times for non-governmental organizations.

While countless flights were diverted early on, only 17 – including six from the U.S. Defense Department and one from Doctors Without Borders – were diverted between Jan. 16 and Feb. 8, according to the logs. That is less than 1 percent of the 2,318 flights allowed to land during those weeks.

Meanwhile, 336 aircraft failed to show up for their assigned slots.

Even as the Air Force required pilots to book landing slots, many worked around the system and flew in without them, the AP review showed. On Feb. 8, only 140 flights had landing slots. As many as 400 – from helicopters to Pipers – arrived in Port-au-Prince.

“I’m not going to sit there and turn anybody in, or turn myself in, but they told us, ‘If you guys come in and can park in the grass, just identify yourselves and land,'” said Carlos Gomez, whose Miami charter company shuttles medical supplies, food and other relief for $28,000 a trip.

The system has had its glitches: Controllers recently lost track of a Learjet they thought was circling while waiting to land. They stopped all landings before discovering the jet was already on the ground. At night, when a runway bulb goes out, the whole string of lights goes dead, forcing crews to stop all landings until they can figure out which bulb blew.

But Air Force officials note that there have been no accidents.

In an interview, Millmann, the brigadier general, gazed at an electronic board showing hundreds of planes heading toward Haiti from all directions, and said proudly: “We want people to know how we’ve done this – the good, the bad and the ugly. In the end, this is the whole world coming together to help those in dire need of help.”