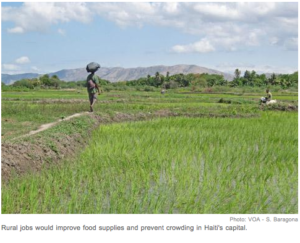 After a powerful earthquake struck Haiti in January, boosting agricultural production was seen as one of the keys to the nation’s recovery.

Six months later, the U.N. Food and Agriculture organization (FAO) says only half the funding pledged for agriculture has been delivered.

Experts say short-changing food production is a common problem in many humanitarian crises and, in Haiti, it threatens to undermine the nation’s already-troubled recovery.

When the earthquake ravaged Haiti’s capital, Port-au-Prince, an estimated 600,000 people fled for the countryside.

The flood of people put tremendous strain on their hosts. Experts believe one of the best ways for the rural areas to cope with the new arrivals would be to create jobs boosting food production.

In a country where more than half the population was undernourished before the earthquake, the extra hands could be put to good use.

“But it definitely is not happening like everybody had hoped,” says Keith Flanagan with the Inter-American Institute for Cooperation on Agriculture. He and others hoped to see large-scale irrigation, reforestation and other projects that would help farmers grow more food.

But, for the most part, he sees a lot of people being paid to sweep the streets.

“Tomorrow it’s going to look just like it did yesterday,” he says. “It is better than a handout, but I think there are things that can make a more lasting impact.”

Most of the reconstruction activity so far has been focused on Port-au-Prince.

“If all the investment now will be done in the city where there are huge needs to reconstruct all the infrastructure, where there will be a lot of demand in terms of construction work, then you will have again a pull effect from the rural areas back into a city that is not ready to absorb a lot more people than they have today,” says Christina Amaral, FAO’s emergency operations chief.

Port-au-Prince was overcrowded before the earthquake. The mass exodus from the capital presented an opportunity to relieve the strain. Now, concern is growing that that opportunity is slipping away.

The United Nations requested $60 million in emergency reconstruction aid for agriculture. It’s a tiny sliver of the total aid package of $1.6 billion the UN had asked for. But six months later, only about half of the funding for agriculture has come through.

That’s no big surprise to Marc Cohen, a policy researcher with the humanitarian aid group, Oxfam.

“If you look across the United Nations humanitarian appeals, pretty consistently agriculture gets short-funded,” he says.

Cohen says part of the problem is an urban bias among policy elites in both the donor and affected countries. He adds that donors get much more immediate and visible results from relief like education, medical care and direct food aid.

But the impact does come, says Cohen, noting that more than 100,000 farm families will soon be harvesting crops grown with seeds, fertilizer and tools donated to help them cope with the earthquake’s aftermath.

The FAO planned to help 25,000 more families, but ran out of funds.

In the longer term, the Haitian government has a $700 million plan to create rural jobs while improving food supplies.

Those programs are expected to begin in the coming months. The World Bank and the United States are making major contributions.

But, in the meantime, people are beginning to drift back into Port-au-Prince, amid concerns that the opportunity to rebuild a less crowded capital and boost the rural economy may be fading.