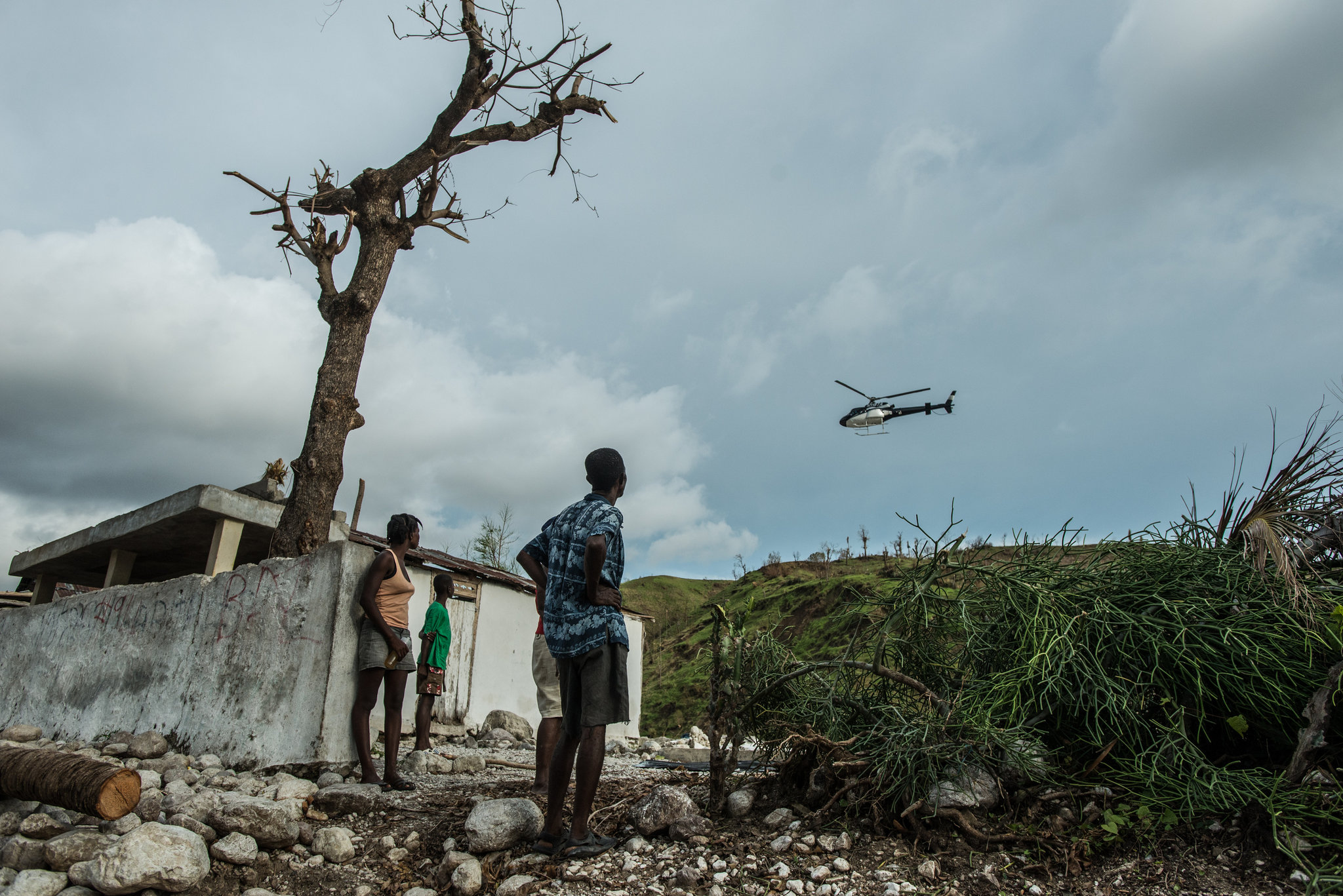 People in a village near Rendel, Haiti, which was destroyed by Hurricane Matthew, watched as a humanitarian aid helicopter flew overhead. One mayor in Haiti estimated that only 20 percent of the food delivered to his coastal community since the hurricane had been properly handed out. Credit Meridith Kohut for The New York Times

They hover over the recovery effort for Hurricane Matthew in its every aspect: the Haitian government’s insistence on coordinating aid, the modest numbers of deaths registered, the struggle to raise sufficient funds, even the blight of cholera now terrorizing remote stretches of the countryside.

There is logic to much of it. After the 2010 earthquake, aid groups took over. They worked around a government as devastated as its capital, undermining billions of dollars in aid and the very people it was meant to help.

For now, the government has put a stop to that.

“My biggest challenge is for donors to understand this time that they must work with us,” said Jocelerme Privert, the interim president of Haiti, during an hourlong interview in his office. “They must understand that everything will go through us, and trust that we have control of the situation.”

The lessons of wasted aid, and its duplicative and disorganized delivery, have grounded the government’s belief that what is done this time must be sustainable.

For instance, people flooded into the capital, Port-au-Prince, after the earthquake. This time, Mr. Privert said, the government is determined to keep communities where they are.

Fields will be resown, homes repaired, and towns and villages recapitalized, he said. If not, Haitians will be left once more with empty water bottles instead of systems to pump fresh water, slums in lieu of repopulated neighborhoods, and food donations in place of better farming.

If not, he said, Haiti could once more become a population perverted by aid, rather than propelled by it.

“At some point, the aid will stop,” he said. “And when it does, if we have done nothing to build back their old lives, to rebuild their capacity, there will be starvation.”

The United Nations secretary general, Ban Ki-moon, chastised the international community on a recent visit for its paltry giving to Haiti this time around. Of the $120 million needed for the hurricane response, less than 20 percent has materialized. 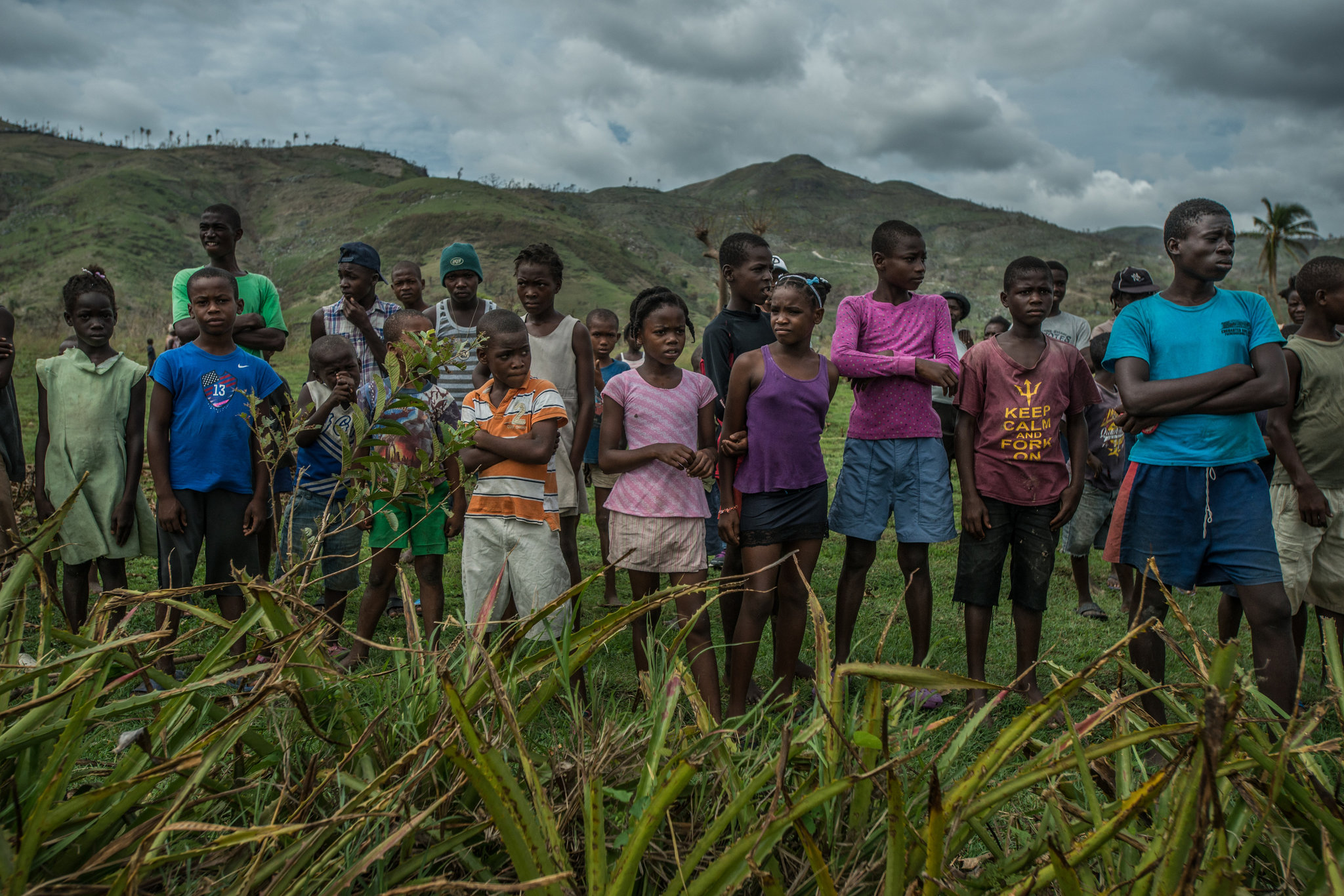 The waste of the past and a general fatigue with Haiti have hampered fund-raising, donors say.

In another painful reminder of 2010, as cholera has surged in areas where water and sanitation were already minimal, it was United Nations peacekeepers stationed in Haiti after the earthquake who first brought the disease to the country.

The government, seizing the reins after the storm, has raised fears that its capacity may not match its ambition.

“We all want to strengthen the government, but the government is fragile,” said Enzo di Taranto, the director of the United Nations office for coordination of humanitarian affairs in Haiti.

“It’s a paradox,” he added. “You really want to reinforce national capacities, but in some cases it goes to the detriment of the victims.”

And sometimes, national priorities are guided more by emotion than reason.

Consider the interior minister’s refusal to distribute tents for hundreds of thousands of people without shelter. It is another scar from 2010, when Haiti became synonymous with tent cities, the images of which were beamed around the world to raise money.

“Maybe we will be a prosperous country one day, and we can use tents to send our children to summer camp,” said an emotional François Anick Joseph, the interior minister, who is overseeing the recovery operation. “But we will never be a nation of tent cities again.”

Jean-Pierre Guiteau, the head of the Haitian Red Cross, said the government needed to be realistic, especially during the rainy season and especially when the only shelters available to many are schools.

The start of the academic year has already been delayed by more than a week.

“It’s not credible to say ‘no tents,’” he said. “If you want school to start, they need a place to stay, and many of their homes are destroyed.”

Data is another point of departure in the wake of Hurricane Matthew. An entire section of the civil protection force is crunching statistics, a herculean task in a nation where numbers are often more art than science.

While media reports suggest that the official figures — 546 dead and 128 missing — are too low, ignoring vast numbers of dead, injured and missing in the affected areas, officials say they are only being careful. There is no intent to minimize the catastrophe, they say. But after accusations following the earthquake that the government had inflated numbers, they are now being cautious. 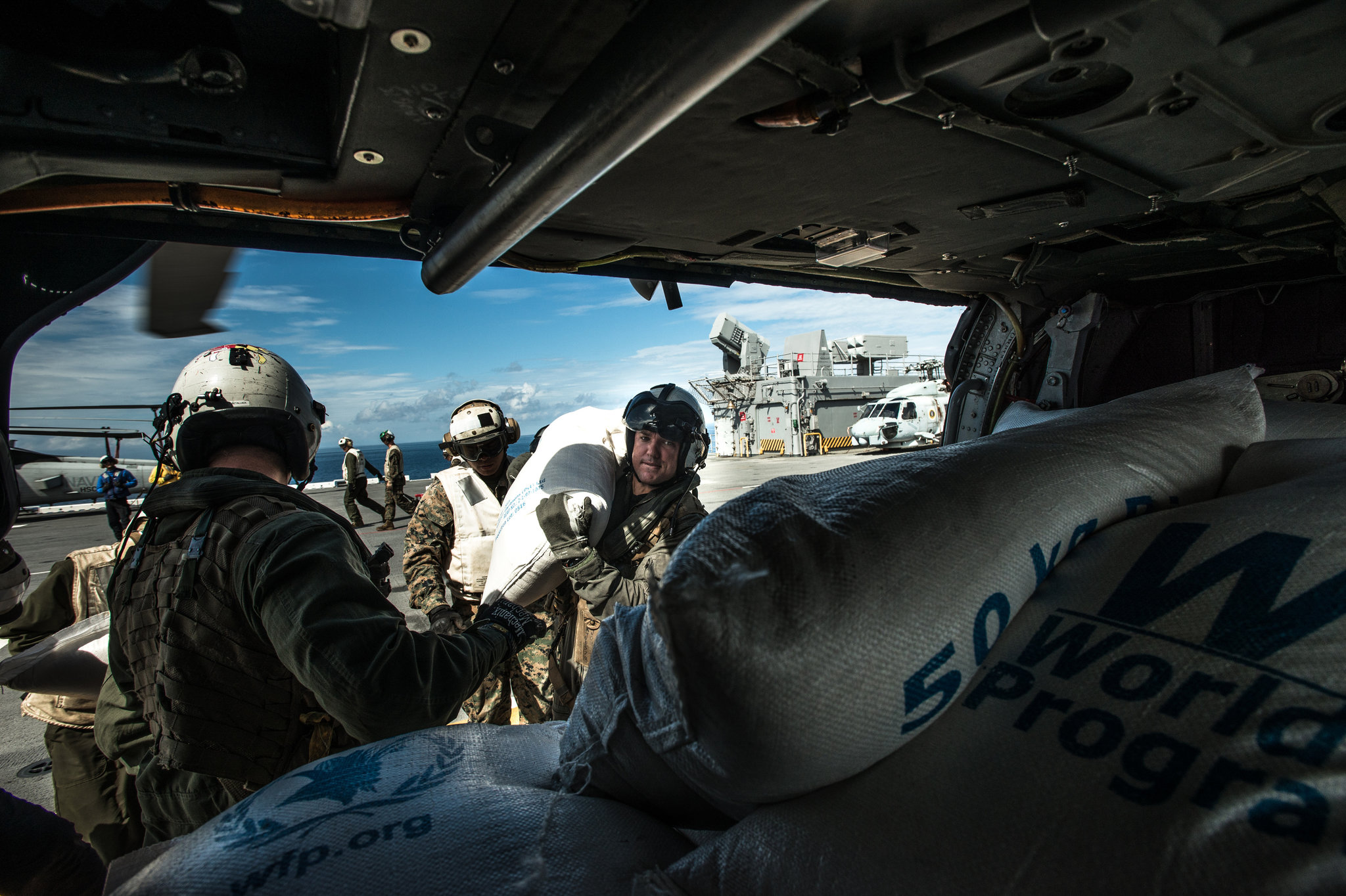 American military personnel loaded bags of rice onto a helicopter on the aircraft carrier Iwo Jima this week for distribution in Haiti. Credit Meridith Kohut for The New York Times

While many families simply buried their dead and moved on, to count an official fatality, the government requires the first and last names of the victim, along with the manner of death.

“This is not a fixed number,” said Marie Alta Jean-Baptiste, the head of the nation’s civil protection agency. “But here in Haiti, data is a big problem. People don’t even have birth certificates.”

There are other more technical differences in the disaster responses then and now. A system of clusters once used to coordinate humanitarian aid, which most claimed was working well in recent years, has been set aside. The government has instead asked donor organizations to funnel through customs the goods they wish to bring in, and then heed the direction of officials on where to take it.

But in cities along the coast, local officials have struggled to reconcile the government mandate with what was happening on the ground.

“I don’t see or feel any central government presence here,” said Jean Gabriel Fortune, the outspoken mayor of Les Cayes, the primary hub for aid coordination in the affected regions.

Schools have become a particularly challenging locus of activity. They typically fall under the education ministry, but their use as shelters requires that the civil protection force be involved for security. The water, sanitation and health care needs of the hundreds living in them engages two more ministries, and schools in Les Cayes also fall under the authority of the mayor.

The nongovernmental organizations seem to be doing what they want, Mr. Fortune said, not caring too much what he has to say.

When he asked some groups to provide departure kits — typically containing tarps and hygiene products like soap — for families living in the schools so they could return home, he claims he was roundly ignored. To date, just one school has been emptied. The rest are brimming with the displaced.

“The classrooms are still occupied,” he said.

Food has become another concern. By the mayor’s rough calculation, just 20 percent of the food delivered to Les Cayes since the storm has been properly handed out. The rest has been looted or the distributions overwhelmed by residents fearful that they would not get their share.

“The way they distribute the aid is anarchic,” the mayor said. “There is zero coordination.”