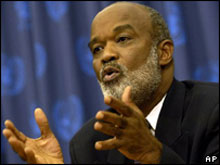 The source also suggests that the Preval government has chosen a foreign  investor so that the bribe/pay-off of something more than $10,000,000   US Dollars can be made without the local rumor mill knowing about it.

The International Community’s pressure to privatize state-owned organizations is a plain and simple effort to create a situation in which the nation will become more independent upon outside sources of finance, such as the IMF.   The sectors privatized will not benefit Haiti financially since these transactions will simply be an opportunity for the Preval cabal to pocket large sums while selling items to close associates or those who will pay big money.

Look to the Preval government to make a move to withdraw recognition of Taiwan in return for a huge cash payment from the People’s Republic Of China. Money one the table, with a lot of money under the table. Preval has had a constant stream of people going to and from mainland Chine for the past two years, including Senator Lambert, members of his cabinet and Chamber of Deputies.

The intelligence suggests large payments will be offered Senators and Deputies to support Preval’s move to sell out one of Haiti’s oldest friends. Taiwan established diplomatic relations with Haiti in 1954 and has poured hundreds of millions into major projects throughout Haiti.

1 thought on “A TELECO SALE TO VIETNAM, THAT IS THE QUESTION????”