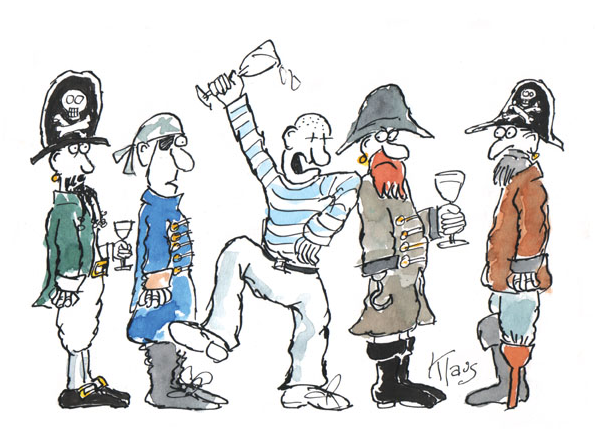 WASHINGTON — Dr. Scott W. Atlas has argued that the science of mask wearing is uncertain, that children cannot pass on the coronavirus and that the role of the government is not to stamp out the virus but to protect its most vulnerable citizens as Covid-19 takes its course.

© Anna Moneymaker for The New York Times Dr. Scott W. Atlas is neither an epidemiologist nor an infectious disease expert, but his…

Ideas like these, both ideologically freighted and scientifically disputed, have propelled the radiologist and senior fellow at Stanford University’s conservative Hoover Institution into President Trump’s White House, where he is pushing to reshape the administration’s response to the pandemic.

Mr. Trump has embraced Dr. Atlas, as has Mark Meadows, the White House chief of staff, even as he upsets the balance of power within the White House coronavirus task force with ideas that top government doctors and scientists like Anthony S. Fauci, Deborah L. Birx and Jerome Adams, the surgeon general, find misguided — even dangerous — according to people familiar with the task force’s deliberations.

“I think Trump clearly does not like the advice he was receiving from the people who are the experts — Fauci, Birx, etc. — so he has slowly shifted from their advice to somebody who tells him what he wants to hear,” said Dr. Carlos del Rio, an infectious disease expert at Emory University who is close to Dr. Birx, the White House coronavirus response coordinator.

Dr. Atlas is neither an epidemiologist nor an infectious disease expert, the two jobs usually associated with pandemic response. But his frequent appearances on Fox News Channel and his ideological surety caught the president’s eye. 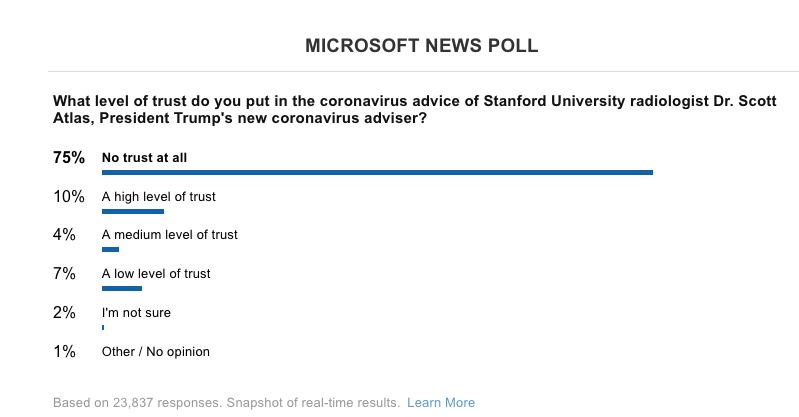 So when Mr. Trump resumed his coronavirus news conferences in July and August, it was Dr. Atlas who helped prepare his briefing materials, according to people familiar with them. And it was his ideas that spilled from the president’s mouth.

“He has many great ideas,” Mr. Trump told reporters at a White House briefing last month with Dr. Atlas seated feet away. “And he thinks what we’ve done is really good, and now we’ll take it to a new level.”

The core of his appeal in the West Wing rests in his libertarian-style approach to disease management in which the government focuses on small populations of at-risk individuals — the elderly, the sick and the immune-compromised — and minimizes restrictions for the rest of the population, akin to an approach used to disastrous effect in Sweden. The argument: Most people infected by the coronavirus will not get seriously ill, and at some point, enough people will have antibodies from Covid-19 to deprive the virus of carriers — “herd immunity.”

Dr. Atlas’s push has led to repeated private confrontations with Dr. Birx, who in recent weeks has been advocating rigorous rules on wearing masks, limiting bars and restaurants, and minimizing large public gatherings.

Dr. Atlas declined a request to be interviewed, but Judd Deere, a White House spokesman, accused the news media of trying to “distort and diminish” his beliefs and record, adding that the adviser “is working to carry out the president’s No. 1 priority: protecting the health and safety of the American people.” White House officials said there had never been an attempt to shift policy to anything resembling herd immunity.

“There’s never been any advocacy of a herd immunity strategy coming from me to the president, to anyone in the administration, to the task force, to anyone I’ve spoken to,” Dr. Atlas said in a radio interview Tuesday.

White House officials said administration policy continued to focus on efforts to curb the spread of the disease while pushing to rapidly develop medical therapies to minimize deaths, as well as a vaccine. The president and his aides believe effective treatments are critical to allowing the country to return to normal.

Before joining the task force, Dr. Atlas pitched his ideas as a health commentator on Fox News, which is in part how he attracted Mr. Trump’s attention. His arrival at the White House has coincided with less visible roles for Dr. Birx and Dr. Fauci, the director of the National Institute for Allergy and Infectious Diseases.

Dr. Atlas pushed for the Centers for Disease Control and Prevention to publish a new recommendation last week that people without Covid-19 symptoms need not be tested, even if they were exposed to an infected person — a move that ran counter to evidence that people without symptoms could be the most prolific spreaders.

In a tense coronavirus task force meeting in which the guidelines were debated, Dr. Atlas angered Dr. Robert R. Redfield, the C.D.C. director, and Dr. Birx, according to senior administration officials.

But it is Dr. Atlas’s embrace of herd immunity that has alienated his colleagues the most.

“When you isolate everyone, including all the healthy people, you’re prolonging the problem because you’re preventing population immunity,” Dr. Atlas said in a Fox News radio interview in July. “Low-risk groups getting the infection is not a problem. In fact, it’s a positive.”

In a Fox News interview in June, he lamented that “misinformation has spread” about herd immunity, arguing: “The reality is that when a population has enough people who have had the infection, and since these people don’t have a problem with the infection, that’s not a problem. That’s not a bad thing.”

In Sweden, the government allowed restaurants, gyms, shops, playgrounds and schools to remain open as the virus spread, asking its citizens to follow social distancing and hygiene guidelines and protect more vulnerable parts of the population.

The Washington Post on Monday reported Dr. Atlas’s advocacy for such a model.

That “soft lockdown” in Sweden had calamitous consequences, even in a country less densely populated and healthier than the United States. Thousands more people died than in neighboring countries that imposed strict lockdowns. The country’s economy also continued to struggle, and Sweden still falls far short of what scientists view as a possible threshold for herd immunity.

But the idea has gained traction in conservative circles. Senator Rand Paul, Republican of Kentucky, says the United States needs to look at Sweden “before letting the nanny-staters shut the economy down again.”

The conservative radio host Rush Limbaugh discussed it on his show in April and cheered Dr. Atlas’s hiring at the White House, saying he was “countering Fauci.”

“Scott Atlas is a brilliant guy, and he thinks by early October that we could well be burned out of Covid,” Mr. Limbaugh said.

Kevin Hassett, a former chairman of Mr. Trump’s Council of Economic Advisers, who returned briefly to the White House this spring to help with the response to the pandemic, called Dr. Atlas “a legendary physician, and one of the smartest guys I know.”

He cited Dr. Atlas’s early warnings for governors to protect nursing homes from the virus. “He’s very similar to President Trump, in that you never have to wonder what he thinks,” Mr. Hassett said.

Mr. Trump is clearly enamored with Dr. Atlas’s arguments, which back up the president’s desire to restart the economy, open schools and move beyond the daily drumbeat of dire virus news.

But fully embracing any version of a policy resembling herd immunity has profound medical and political risks. Simply allowing the virus to travel through most of the population could lead to hundreds of thousands, if not millions, of deaths. And medical officials are still not sure how long that immunity might last, and how long-lasting some effects of the virus could be.

“Trying to get to herd immunity other than with a vaccine isn’t a strategy,” said Dr. Tom Frieden, a former C.D.C. director. “It’s a catastrophe.”

Dr. David Dowdy, an infectious disease epidemiologist at Johns Hopkins University who has researched and written about herd immunity, said that “the appeal of the concept of herd immunity is that it suggests we can simply go about doing our regular daily lives and the coronavirus pandemic will take care of itself,” but that it has been tried and has not worked. “Where we have had less stringent responses, we’ve had more cases and more deaths,” he said.

Dr. Atlas’s medical background — chief of neuroradiology at Stanford University Medical Center from 1998 to 2012 and editor of the textbook “Magnetic Resonance Imaging of the Brain and Spine” — appears incongruous with his current role.

But Dr. Atlas does have political connections in Mr. Trump’s world. He has advised the president’s personal lawyerRudolph W. Giuliani, and his Hoover Institution employs several staunch supporters of Mr. Trump’s handling of the virus.

Some Hoover scholars were early opponents of state and local government moves to shut down economic activity in March and April, including Richard Epstein, a law professor who predicted in March that only 500 Americans would die of the virus.

Another Hoover scholar, David R. Henderson, wrote in May: “If the lockdowns are ended immediately, will there be more deaths than if the they were not ended forthwith? Probably. But that won’t be enough to declare that ending the lockdown was a failure.”

In Washington, Dr. Atlas has introduced new tension to the coronavirus task force.

In one of his first meetings, he argued over the science of mask wearing. As Drs. Fauci and Birx maintained that drops in caseloads reflected public health measures such as social distancing and mask-wearing, Dr. Atlas insisted that peaks and declines could have merely been the virus running its course, senior administration officials said.

In a June interview with the Hoover Institution, he called it “literally irrational” to close schools. “All over the world, Switzerland, Iceland, Australia, the United Kingdom, Ireland, Asian countries, there is a minimal, if any, risk of children transmitting the disease, even to their parents,” he said.

His role in the White House has given conservative media a new official to present as a scientific authority on the coronavirus.

“The reality is that there’s certain data that’s very controversial about masks,” he told Tucker Carlson, the Fox News host, in August, railing against the “massive amount of fear bordering on hysteria.”

Dr. Atlas has also regularly promoted an idea that immunologists say is simply wrong, that immune cells called T cells, programmed with infection from other coronaviruses, can function like antibodies to prevent Covid-19.