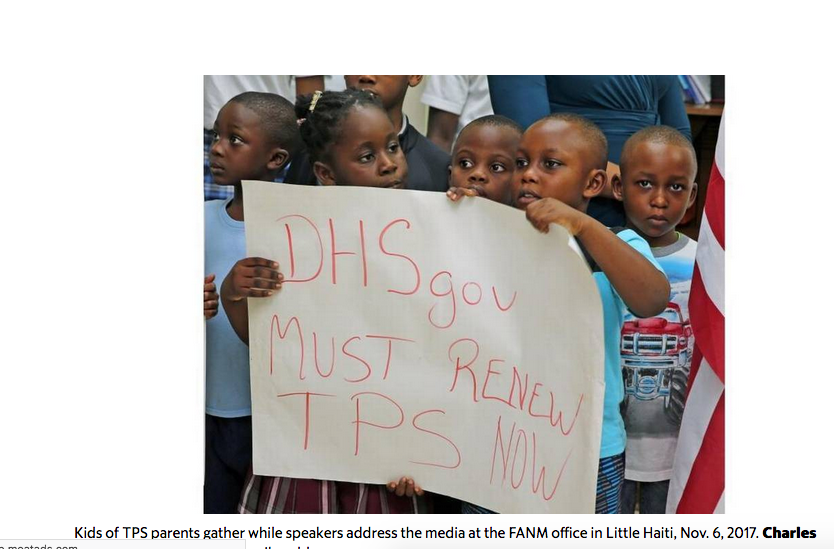 As the Trump administration weighs whether to end Temporary Protected Status for thousands of Haitians and Salvadorans, three members of Congress are preparing legislation that would allow every TPS recipient to apply for permanent residency.

The bill, dubbed the ASPIRE Act, would let every person covered by TPS on Jan. 1, 2017, apply for permanent residency by proving before a judge that they would face extreme hardship if forced to return home.

“The Temporary Protected Status program was created with bipartisan support to protect human life,” said Rep. Yvette Clarke, D-N.Y., who plans to introduce the legislation with Miami Republican Rep. Ileana Ros-Lehtinen and Washington Democratic Rep. Pramila Jayapal. “It advances American interests and values and we must work in a bipartisan manner to do the right thing and protect hardworking immigrants from being sent back to countries where their physical well being could be cast into doubt.”

The bill also creates a new form of “protected status” for TPS recipients who have been in the U.S. for at least five years. Instead of waiting for renewal or revocation of their status every 18 months, current TPS recipients would be able to stay in the U.S. for a renewable six-year period, though they would not be eligible for permanent residency if they cannot prove extreme hardship.

Clarke’s proposal is more expansive than a bill sponsored by Miami Republican Rep. Carlos Curbelo that would provide a path to permanent residency for TPS recipients from Haiti, Nicaragua, El Salvador and Honduras who arrived in the U.S. before Jan. 13, 2011. Ros-Lehtinen and Miami Republican Rep. Mario Diaz-Balart have signed on to Curbelo’s bill.

The ASPIRE Act would also correct what Clarke’s office calls an “error” in existing law that requires TPS recipients who arrived in the U.S. illegally to leave the U.S. and reenter to adjust their status. Instead, a TPS designation would be enough of a reason to apply for permanent residency without having to leave the country.

Last week, the Trump administration announced that TPS for about 2,000 Nicaraguans will end in January 2019, while about 60,000 Hondurans will get a six-month TPS extension until July 2018 instead of the typical 18 months. The Department of Homeland Security did not announce a decision for Haiti and El Salvador. A decision on Haiti must be made by Thanksgiving.

Clarke’s office said her bill could attract Republican support because it does not automatically give TPS recipients a path to permanent residency. A judge must find that a TPS recipient would face extreme hardship if they return home.

The bulk of Haiti’s 50,000 TPS recipients reside in Florida, and every member of Congress who represents South Florida is in favor of extending TPS for Haiti. But the Trump administration is hesitant to embrace any immigration policies that expand immigrant protections, noting that TPS was always meant to be a temporary solution for people affected by natural disasters or armed conflict.

While TPS is a major issue in Florida, Ros-Lehtinen questioned how much the GOP-controlled Congress cares about the program, which affects over 300,000 people.

“I spoke yesterday about TPS, had hardly anyone ask me about it. I spoke again today about TPS, radio silence from my colleagues,” Ros-Lehtinen said last week. “There’s just no interest for immigration reform generally, and I don’t think there’s much appetite to help these two particular groups of people. It hurts to say it but it’s the political reality.”