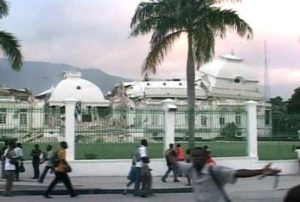 By The Associated Press (CP)

A look at Sunday’s elections in Haiti:

Voters are choosing one of two candidates in the second round of the presidential election as well as seven senators and 77 members of the Chamber of Deputies. The announcement in December of the first-round presidential results sparked nearly three days of rioting that shut down the capital. The Organization of American States eventually determined those results were flawed and the government-backed candidate was dropped from the runoff. Whoever becomes president will face severe challenges, including a cholera outbreak, an opposition-controled legislature and anger over the stalled reconstruction from the devastating January 2010 earthquake.

WHO ARE THE CANDIDATES:

The presidential candidates could not be more distinct. Michel “Sweet Micky” Martelly, 50, is a brash musician, considered a master of a Haitian style of music known as compas. He has never held public office, has no college degree and a history of notoriously crude stage antics. His opponent is Mirlande Manigat, 70, a university administrator, former first lady and longtime fixture on the Haitian political scene. She would be Haiti’s first woman elected president, though not the first to hold the job — an honour held by a supreme court justice who was provisionally appointed to the post following a military coup in 1990.

WHAT ARE THEIR PLATFORMS:

The two candidates have similar agendas, promising to provide universal education in a country where only half the children attend school and to build houses in a country that has seen little reconstruction. Both have said they want to restore Haiti’s armed forces, eliminated by President Jean-Bertrand Aristide in 1995 after years of abuses, and provide government services in the countryside. The campaign has largely been about the candidates’ distinct personalities while Martelly has enjoyed a boost for his popularity among urban youth and his outsider status.

WHEN WILL RESULTS BE ANNOUNCED:

A university degree, or degree are not of much use if you don’t use them. Manigat has really done nothing with her much-mentioned education other than pop up every five years to promote her husband’s rejected candidacy for the presidency. Now that he is suffering from dementia she is having a shot for herself with a campaign coordinated by a number of major cocaine traffickers, recognized as such by the DEA.

Martelly was accepted by a number of substantial universities, and attended for a while until, like many others, he created a better, successful  future elsewhere.

Manigat has never had any success within the private or commercial sector. Being an administrator at the Haitian college is more an honorarium than a real challenge.

And let’s cut the perpetual crap about the Haitian military having a history of abuse.

Aristide destroyed it so that he could function as he wished…leaving the nation without any law-and-order. This situation prevails now. Both candidates would not recommend the revival of the FAdH – the Haitian military.

They recommend it BECAUSE THE HAITIAN PEOPLE WANT IT!!!!!

Martelly put 500,000 people in front of the palace this week.

Manigat managed one or two thousand at a rally in the same time frame.

There must be a Democratic message here, one that the international community is trying to ignore by forcing a Manigat presidency.

Watch for chaos if Martelly is blocked.