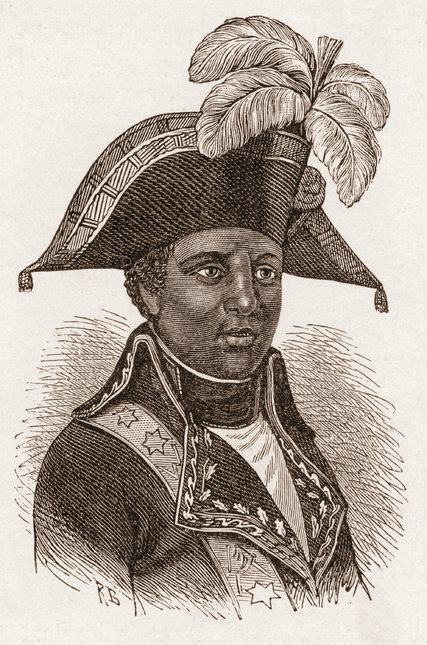 Any number of books have been written over the centuries about the leader of the Haitian slave revolution, but “Toussaint Louverture,” by Philippe Girard, is only the second in English to draw deeply on the original documents. The book is superb, though perhaps not in every way. And the greatest of its virtues is to stand knowledgeably and disputatiously in the shadow of its predecessor, the first of the extensively researched books in English, which was “The Black Jacobins,” from 1938, by C.L.R. James, the West Indian Marxist. “The Black Jacobins” was more than superb. It was a masterpiece. But 1938 was long ago.

James wanted to show that oppressed people are capable of taking their destiny into their own hands, given the right circumstances. On the sugar and coffee plantations of France’s Saint-Domingue colony — which eventually renamed itself Haiti — the African slaves were oppressed in the extreme. And yet once the French Revolution had broken out and the gospel of the Rights of Man had radiated to all corners of the universe, and once the European powers had fallen anew into interimperialist war, the extremely oppressed saw their opportunity. They found a leader in L’Ouverture. They found allies among the rebelling working people of France (in James’s interpretation). And beginning in 1791, they started the only successful slave revolution in the history of the world.

James saw in this something larger yet — a remote early stage of the anticolonial revolution in Africa, which, as he predicted, was going to break out in the years after he wrote his book. And he saw the beginnings of the black revolution in still other parts of the world. His “Black Jacobins” was in those respects a revolutionary tract aimed at the future, and not just an inquiry into the past. It was a literary achievement too — one of the very few works in English (Edmund Wilson’s contemporaneous “To the Finland Station” is another) to reflect the influence of Jules Michelet, the most thrilling of the 19th-century historians of the French Revolution. Michelet was a master of moral condemnation, and C.L.R. James, likewise.

But all of this is what Philippe Girard wants to avoid. Girard does not wish to contribute to a revolutionary program, not in a 1930s version, nor in any of our versions from today. He is a professor at McNeese State University in Louisiana, and his intention is merely to reveal the experiences and motivations of L’Ouverture himself. This has led him to dig into a great many more antique documents from France and Haiti than were available to James, and quite a few more documents than came under examination by a more recent biographer, Madison Smartt Bell. New facts turn up by the spadeful in his book. Old falsities crumble into dust. Now and then he climbs atop his heap of discoveries and judiciously grants himself license to conjure out of his own imagination scenes that surely must have taken place, even if the documentary evidence is lacking.

He tells us that L’Ouverture’s father, Hippolyte, was an aristocrat of the Allada kingdom of West Africa, who was captured with his family by the hostile Dahomey Empire circa 1740 and sold into slavery to the Europeans. He imagines the scene of Hippolyte and the family being stripped of their clothes and branded. L’Ouverture’s “father, whose tattoos and scarifications were a sign of pride, because they indicated his rank as an Allada aristocrat, now bore a shameful mark of his servile status on his burning skin. So did his wife and crying children. They were led onto a shallop, which battled the frightful surf all the way to a European ship waiting offshore.” Girard thinks he may have identified the ship in question, the Hermione. And with brush strokes of this sort, he paints a psychological portrait of L’Ouverture himself.

James railed against various of L’Ouverture’s detractors who attributed to him a merely personal ambition. But Girard thinks that a desire for what had been taken from his father — a “craving for social status” — was, in fact, the most constant of L’Ouverture’s motivations. L’Ouverture wanted to be recognized by the slave-owning white planters and by the French. He wanted “to benefit financially.” Yet I wonder if, in making these points, Girard hasn’t underplayed a different and nobler set of motivations, which James emphasized and documented by quoting lengthy and ardent passages from L’Ouverture’s correspondence on Enlightenment and French revolutionary themes, together with passages showing how zealous he was to rebut slanders against the black race.

On one matter Girard leaves no doubt, which is that L’Ouverture sometimes put his well-known talent for deceit to ruthless purposes. There was a moment in 1799 when, seeing an opportunity to curry favor with the British Empire and the hostile Americans, he treacherously betrayed an antislavery conspiracy in Jamaica — a coldblooded act if ever there was one, even if it served the narrow interest of the emancipated slaves in Saint-Domingue. Maybe L’Ouverture’s antislavery principles were more flexible than James could ever have suspected. L’Ouverture was himself a slave owner at one point (as his father had probably been in the Allada kingdom, Girard tells us), which is a fact that emerged only in 1977.

It is a little shocking to learn from Girard that at an early point in the revolution, when the antislavery cause seemed on the verge of collapse, L’Ouverture broached the idea of betraying his own emancipated followers by leading them back into bondage, in the hope of getting official protection for himself and one of his comrades. Ultimately he restored the slave trade in Saint-Domingue, after having abolished it — restored it because the plantations needed laborers, though he intended to free the newly purchased Africans after they had toiled for a number of years. Meanwhile he promulgated a labor code that in practice was only marginally better than slavery, even if it maintained the principle of emancipation.

L’Ouverture was not, in short, an “abolitionist saint.” He was a man of his time. L’Ouverture’s “equivocation was representative of an age that had to reconcile Enlightenment principles and the labor requirements of plantations. Like three other great figures of the Age of Revolutions — Thomas Jefferson, Simón Bolívar and Napoleon — he had conflicted views on the delicate matter of human bondage.” At least L’Ouverture brought a greater lucidity to his conflicted views than did Jefferson or Napoleon. He knew that his goal was double: to preserve Saint-Domingue’s prospects for wealth, and, even so, to uphold the abolitionist idea.

He wanted the emancipated slaves to be able to profit in the future from the achievements of the advanced French civilization. With that purpose in mind, he intimated that, under his leadership, revolutionary Saint-Domingue was going to remain formally attached to metropolitan France. He also wanted to ensure that metropolitan France would never be able to reinstate slavery. And with that additional purpose in mind, he stipulated that formal attachment should allow for a considerable autonomy. To benefit from Europe without risking destruction at the hands of the Europeans — that was his idea.

He built the first Western-style modern black army in order to achieve this attractive and nuanced goal. His army defeated or fended off one adversary after another — the sometimes genocidal-minded white planters, the Saint-Domingue mulattoes, various black insurgents, the Spanish Empire and the British imperialists. Napoleon dispatched two-thirds of the French Navy with a large army to crush the revolution, and L’Ouverture set the stage for the defeat of that army too. Only, in the course of doing so, he ended up under arrest. Napoleon sent him to his death in a French prison, which led the freedmen of Saint-Domingue to do what L’Ouverture had always warned them against, namely, to initiate a general massacre of the whites and to declare a total rupture with France: tragic misfortunes for the future of Haiti.

L’Ouverture’s triumphs proved to be in these ways less than total. And yet what hero in history has ever achieved everything? Napoleon, his archenemy, declined to grant him even a modicum of respect. Jefferson slighted him. L’Ouverture nonetheless showed himself to be those men’s superior, philosophically, politically and militarily — a point made by C.L.R. James that survives mostly intact in Philippe Girard’s sophisticated and anti-mythological biography.

Paul Berman is the critic at large for Tablet.