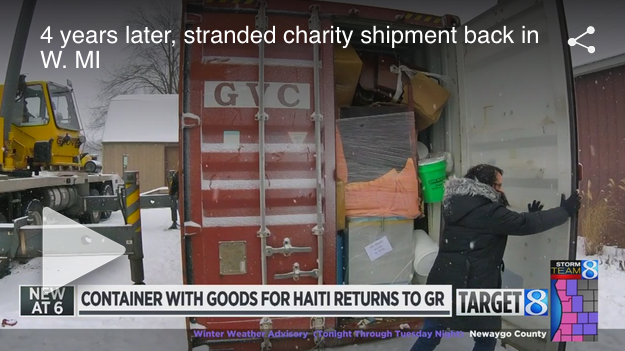 WALKER, Mich. (WOOD) — A shipping container filled with relief supplies that never arrived in Haiti is back in West Michigan, four years later.

The 40-foot-long shipping container arrived in the Grand Rapids area around 8:30 a.m. Monday, after a weekend on the road from Miami, Florida.

Target 8 has been tracking the container for years, after it disappeared in December 2013, packed to the top with supplies for Haiti.

Sixteen charities and churches, many based in West Michigan, paid Rays of Hope International to ship a load of medical and other supplies from Grand Rapids to people in need in Haiti.

Target 8 Investigators got a tip in the summer of 2015 and began looking for the missing container. Months later, a man from the Haitian Consulate in Chicago found it sitting where it had been dropped off in 2013, at a shipyard in Miami.

The shipper Rays of Hope International hired said he paid another company to transport the container by ship to Haiti. But he said that company took the money and went out of business.

Rays of Hope International, the shipper, and the shipyard in Miami all contacted lawyers. It took two more years and a mediator from the Federal Maritime Commission to reach an agreement that ultimately led to the container’s return to the Grand Rapids area Monday.

“There were certainly days when I didn’t think I’d be seeing it again,” said Valerie Mossman-Celestin of Haitian Artisans for Peace International.

Her organization had solar-powered electrical equipment packed in the container along with clinic supplies, including medical beds.

“(They were) things they’ve been waiting a long time for,” she said.

Mossman-Celestin watched the container arrive Monday and dragged open its heavy door. At first glance, it appeared that everything was still on board and in good condition. However, a quick sniff proved the rice and beans on board didn’t fare so well.

The 16 organizations brought the container back to the Grand Rapids area because some of the items on board may have expired or have been damaged while sitting dockside in steamy Miami.

The groups will now offload and examine their supplies, which also included an entire indoor gym for a school in Haiti. The items that are in good condition will be repackaged and shipped off again.

The organizations don’t know how they’ll pay for transporting the container yet; they’re out the money they originally spent.

“I’m guessing we’re looking at at least 12 grand to turn this around and get it back to Haiti,” said Mossman-Celestin. “And currently nobody’s got that cash in their pocket.”

Haitian Artisans for Peace International and the other groups are hoping generous donors will come forward to make it happen. Those interested in helping can contact HAPI or Rays of Hope International online.