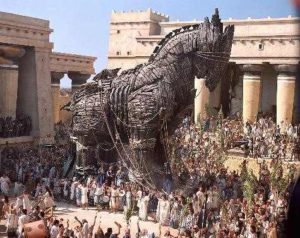 Around the 911 period, Haiti under Aristide was seen as a useful conduit into the United States. There was an influx of strange Arabs, without any connection to the Haitian/Arab community. And these strangers had a great deal of money.

Even now, there is a grouping of outsiders building a mosque in Cap Haitien that has locals worried. 14 were intercepted on a sailboat full of Haitian Boat People enroute to the United States within the past months. They were picked off of Tortuga.

These same people are part of a   group that runs cocaine from a coastal   point, into the Labadi  resort on jet skis. Labadi sees the massive American tour boats dock there. The cocaine is then taken to the States on these boats. The thousands of tourists, on each trip, plus the thousands of boat workers, cannot be adequately searched upon arrival – without created irritating delays for the tourists. We would not want to irritate tour customers, so the cocaine flows.

Yesterday’s arrest of 15 Pakistani nationals is just the tip of a worrisome potential. America is at war and the Caribbean is the soft underbelly via which the enemy can gain access to the mainland. Haiti, with its lack of real control, is the ideal route for terrorist, and other elements.

One cannot hope that the anti-American MINUSTAH will protect us from our enemies, when many of its team are enemies themselves.

2 thoughts on “15 PAKISTAN NATIONALS ARRESTED BY NATIONAL POLICE IN GONAIVES: ARE THEY POTENTIAL TERRORISTS ON WAY TO STATES??”