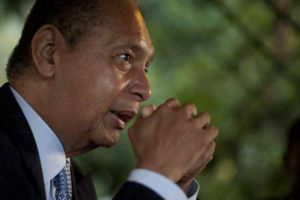 THOMASSIN, Haiti — They say he came home to die.

But almost four months after his shocking return, Jean-Claude “Baby Doc’’ Duvalier appears to be the epitome of life.

His once gaunt frame has filled out. His round-face, robust. And he is standing tall, moving about like a man with a purpose — not an accused criminal possibly facing prison.

A one-time despot driven from his homeland in disgrace, Duvalier, 59, has been acting like a president who left at the pinnacle of his popularity. He’s holding court at tony restaurants, hobnobbing with powerful players and greeting guests at his borrowed home high in the pleasant hills above the congested capital.

“The phone is ringing all of the time and I’m receiving a lot of visitors,’’ Duvalier told The Miami Herald, describing a typical day in the life of Haiti’s former president-for-life.

But as an aging Duvalier enjoys the perks of his new-found celebrity status in this earthquake-ravaged nation, he is igniting outrage and conflicted emotions. Former prisoners recalling his repressive regime demand justice, while others longing for the days of order insist on reconciliation. A former Haiti justice minister advising the government worries that Duvalier may never have his day in court to answer charges of corruption and crimes against humanity during his 15-year rule that ended in 1986. The judge tasked with investigating the charges has yet to issue his report and the longest imprisoned complainant, Claude Rosier, recently died of a heart attack.

Some find the timing of Duvalier’s return to Haiti peculiar. Last week the Swiss government announced it had begun procedures to return $6.7 million in frozen assets claimed by him to the Haitian government, a move some close to Duvalier said he plans to fight in European courts. And in just days, Haiti will inaugurate a new president with strong ties to supporters of his authoritarian regime.

“I did not send them and they are not there as Duvalieriests,’’ Duvalier said about President-elect Michel Martelly’s supporters who include Daniel Supplice, a childhood friend and former Duvalier minister heading Martelly’s presidential transition teams.

Martelly has suggested amnesty for Duvalier and Jean-Bertrand Aristide, another president recently returned from exile. Victims and human rights observers, who view prosecution of Duvalier as Haiti’s chance to break with impunity, call the suggestion disturbing.

The son of an often brutal dictator, Duvalier shrugs off reactions about his high-profile status and appetite for Haiti’s finest fare: “I’ve always participated in the social life of the country,’’ he said.

For those with tortured memories of the nearly three-decade venal Duvalier dynasty, however, the new reality is difficult to accept.

“People disappeared,’’ said Michele Montas, among scores of Haitian journalists and intellectuals jailed, some severely beaten and exiled by the regime’s boogeymen after their arrest on Nov. 28, 1980 under a 1969 anti-communist law that considered government criticism “crimes against the state.’’

Today, she’s among a growing group of Haitians who have filed formal complaints, accusing Duvalier of failing to prevent or punish crimes under his command, ordering arrests and prolonged detention, and in some cases of being an “accomplice’’ to crimes committed by his subordinates.

“The victims are constantly on the defensive, taunted every time they testify in front of the instructing judge by his (Duvalier’s) very aggressive lawyers, outside of the judge’s chambers, and the stress of seeing Duvalier freely moving about is difficult… for all of us,’’ Montas said.

While Montas has managed to avoid public run-ins with the deposed leader, fellow accuser and cellmate Dr. Nicole Magloire has twice lost her battle. The first run-in was in February during an after midnight visit to a popular Petionville restaurant. She stormed out in disgust, she said, after walking up on a laughing Duvalier listening to jazz while sipping red wine as patrons stopped to shake his hand.

The most recent was at the funeral for her uncle Jean Magloire’s widow. Jean Magloire was a staunch backer and former interior minister of Duvalier’s father, Francois “Papa Doc’’ Duvalier.

Like a number of politically involved middle-class Haitian families, Mangalore’s was divided on the question of Duvalier’s rule.

Duvalier’s re-emergence and her suit, to a degree, has reignited “the animosity between family members.’’

A student activist during Francois Duvalier’s rule in the 1960s, she vowed to stay out of politics when she returned to Haiti from medical school. Then on Nov. 28, 1980, she was arrested.

“You can’t have all of those people who died, who went to jail, and then just sit and say, ‘So what?’” she said. “I’m angry. But I am no longer afraid. I don’t ever want to be afraid again. At least today, we can say what we want and not be afraid again.’’

President René Préval has been credited with ending state-sponsored violence, political repression and silence in the country. He had successfully avoided running into Duvalier until the day of the funeral. Lise was the mother of one of his closest friends and advisers, Robert Magloire.

The first of the two handshakes happened in the middle of the funeral mass when Duvalier walked up to Préval and outstretched his hand in an offering of peace.

“It was not a meeting. We were at a funeral, our paths crossed,’’ Préval told The Herald a day later. “Justice will take care of the rest.’’

The funeral put into clear view Haiti’s troubled political history — and the challenges of Haitian justice. Sitting across from Duvalier was ex-wife Michele Bennett, a frequent visitor to Haiti despite being among the 38 other defendants named in the state’s corruption case against her former husband. Also in the audience was Prosper Avril, another controversial former president who escaped from prison in 2004 amid chaos after Aristide’s flight into exile.

Carves Jean, the judge investigating the case, said Duvalier is under house arrest. Duvalier and his attorney Fritzo Canto say no such thing exists under Haitian law. They punch holes in the government’s 25-year-old legal case, challenging it on procedural grounds and argue the statue of limitations has run out. Duvalier himself laughs at the state’s claims that he and his supporters pillaged the national treasury, and he spirited away $120 million in public money when he fled to France on Feb. 7, 1986.

In an hour-long interview, Duvalier said Haiti cannot have a fresh start without national reconciliation. He questioned the current government’s commitment to helping victims of the devastating earthquake and the role of non-governmental organizations. And he spoke of Foundation Duvalier, an organization he’s forming to prioritize education, health and environment in his mother’s hometown of Leogane.

“We are having meetings to evaluate the social and economic conditions of the country to see how we can help the people,’’ he said.

His heart aches for the peasants, whom he said, have been forgotten and says his failure to sell a schools’ Creole-language program, successfully used by Aristide and Préval, is the only do-over for his otherwise “progressive” government. He takes no responsibility for the weaken institutions and wrecked economy that characterized his last years in office, all of which, critics say, have made Haiti incapable of steering its own post-quake recovery.

“We realized progress in several domains….We were in a real fight,’’ he said.

As for the human rights abuses against him, Duvalier said, he released hundreds from his jails, and those arrested were done so because “they were a risk.’’

“You can’t ask the president to be behind every individual,’’ he said. “When I was made aware of an undisciplined act against someone, I took sanctions.’’

Bernard Diederich, a retired correspondent for Time magazine who has covered Haiti since 1949, isn’t surprised Duvalier and his supporters are revising history.

“Nobody has a memory of what happened including him,’’ said Diederich, who recently published the French-language book — L’Heritier, (The Heir) — about Duvalier. “He had the opportunity to be somebody, but he didn’t have it in him. He’s always been micromanaged by everyone. That is the sad thing. The guy could have done a lot. The people were ready, the people wanted it.’’

First of all, Jean Claude Duvalier does not need any sort of amnesty. Even if he had committed any crimes, for which he could be prosecuted – all are statute barred since there is a limit of 20 years in Haiti.

On the other hand – Aristide and Preval both require amnesty, if they are to avoid prosecution for murder, kidnap, torture, cocaine trafficking and theft of billions.

Aristide’s murders of Sylvio Claude, and Roger Lafontant are statute barred. His involvement in the murders of Mireille Durocher Bertin and Jean Dominique are not.

Once again, Ambassador Ernie Preeg’s comment in his University of Miami monograph on the Caribbean Basin Initiative. “It can honestly be stated that the Jean Claude Duvalier presidency is the longest period of violence free stability in the nation’s history…”

You surely cannot even suggest that for the Aristide/Preval era.

Also, the $6,100,000.00 mentioned by Charles is not sought by Duvalier for himself. It was part of a trust set up by his mother for charitable purposes. When the earthquake of January 12, 2020 struck Duvalier immediately asked for the funds to be given to a trusted organization, for the use of Haiti’s people.

He did not consider the Preval government as a trustworthy organization.

And the release was blocked by Ira Kurzban, Aristide’s lawyer, who wanted 15% for his fees in some obscure action he initiated years ago. The funds remain blocked from use by Haiti’s people be the actions of Ira Kurzban, who has already taken over $10,000,000.00 from the Haitian people in legal fees.

That’s a lot of rice and beans for starving children.

Do not include Aristide and Preval in the same category with Jean Claude Duvalier.